The reigning champs of the 2019 Worlds settle for third place in this year’s LPL Spring tournament. 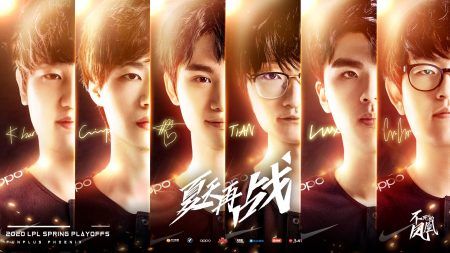 In a clash between the 2018 and 2019 League of Legends World Champions, reigning champs FunPlus Phoenix claimed a third place finish in LPL Spring 2020 with a convincing 3-0 sweep over Invictus Gaming.

The buzz started an entire day ahead of the match, when starting rosters from the competing sides were released. Invictus Gaming shuffled their lineup to start Gao “Ning” Zhen-Ning over Lu “Leyan” Jue in the jungle. Meanwhile, Kim “Khan” Dong-ha was chosen to start over Kim “GimGoon” Han-saem in the top lane for FunPlus Phoenix.

Both substitute players saw only limited playing time in the regular season, so fans were looking forward to what they could bring to the table.

FPX took control early in game one. Gao “Tian” Tian-Liang played Graves for the first time this season, and made his presence felt all throughout the map.

In a surprising turn of events, Khan on Ornn also solo killed Kang “TheShy” Seung-lok on Jayce within the first ten minutes of the game.

Tian stretched Khan’s lead further by paying two more visits to top lane, turning TheShy’s laning phase into a miserable one with four deaths on the board.

Capping iG’s kills to three, FPX dominated the rest of the game, making full use of crowd controls to win team fights and subsequently secure objectives.

In the end, iG paid the price of not banning Galio, a champion that has been 100% banned by teams who faced off against FPX in the playoffs.

In game two, iG’s Song “Rookie” Eui-jin slipped away from his usual champion pool and locked in Azir, a champion he’s only played once in the regular season. In response, FPX picked Twisted Fate for Doinb to once again maximize his roaming play style.

Completely outplaying iG at level one, FPX had a clear plan and flawlessly executed it.

First, they grouped to force Ning out of his own jungle at the bottom side of the map. Predicting that he would head to FPX’s red buff at top, the team had already set up Trinket wards to spot him out. Rotating Doinb, Khan and Tian, they trapped Ning in a difficult situation and reaped first blood.

Invictus Gaming was down by six kills early — three of them coming from TheShy’s Jayce already getting killed three times. It was not until thirteen minutes around Rift Herald when Ning found an important pick onto Khan’s 5/0/0 Aatrox that removed his gold bounty.

Things looked good for iG from this point on as Rookie on Azir was often left untouched in the back line in team fights. iG evened up objectives, and even led in gold as the game transited to late game.

However, the post-game’s gold difference graph says it all. After pushing all three lanes into iG, FPX sneaked Baron and finished it swiftly without contest. Individual mistakes caused the scrambling iG side to get picked off one by one, allowing FPX to push in for the game two win.

Riding on the wave of victory, Khan locked in his signature pick, Fiora, as a counter-pick to TheShy’s Aatrox in game three.

For iG, Ning brought out his own comfort champion, Zac.

Unfortunately for iG, the early game played out exactly the same way as it did in the last game. Ning went in deep into FPX’s jungle to attempt to steal Wolves, but he was sniffed out by Tian whose reinforcements arrived first, easily killing his Zac for first blood.

iG tried to switch things up by rotating Su “Southwind” Zhi-Lin to top lane at level three to relieve pressure and keep Khan’s Fiora at bay. Not long after, a well-timed teleport to bot lane by TheShy extended the lead to two kills.

Despite being down in kills, Khan challenged TheShy to a one-on-one duel. In a delicate skill match-up, he spaced out trades to outplay TheShy to get the solo kill. He even managed to escape from the clutches of Rookie’s Azir who appeared on the scene at the last moment.

FPX ran wild with the game after that play, out-rotating iG at every corner. When ahead, Fiora is a monster, and no one on iG could match Khan in a side lane. With three dragons and a Baron buff, FPX demolished iG’s Nexus in just 23 minutes, wrapping up the series sweep.

The 2020 LPL Spring Playoffs conclude with Top Esports and JD Gaming competing for the title at 5 p.m. GMT+8.

READ MORE: Top Esports and JD Gaming will face off in the LPL Spring final