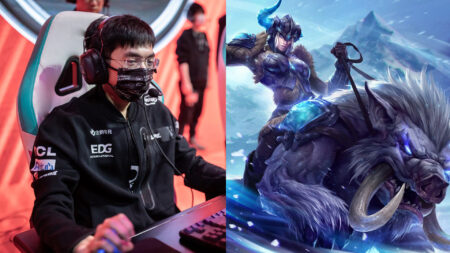 After more than a week of best-of-five king of the hill matches, the 2021 Spring LPL playoffs finally reached Round 4. This is where Royal Never Give Up, FunPlus Phoenix, Top Esports, and Edward Gaming get second chances in the lower bracket.

The day before, FunPlus Phoenix swept Royal Never Give Up 3-0. This series between Edward Gaming and Top Esports determined which team will meet the 2019 World Champions in the semifinals.

Both teams were equal in gold in game one, trading blow for blow. In the mid game however, Edward Gaming accumulated a kill lead, and started to run away with the game thanks to Lee “Scout” Ye-chan’s rotations with Ryze’s Realm Warp ultimate.

Switching sides in game two, Edward Gaming were last pick on red. Locking in Sejuani, shoutcasters and fans thought that she was going into the jungle, while Volibear went top.

It was not until the last few seconds when viewers realized that Edward gaming top laner Li “Flandre” Xuan-Jun was holding onto the Sejuani instead of jungler Zhao “Jiejie” Li-Jie.

“One of the good things Sejuani does well, usually in the jungle position, is she works really well with melee champions,” explained former LEC personality and guest color caster, Indiana “Froskurinn” Black.

On Sejuani, instead of Grasp of the Undying for sustain, Flandre even opted for Phase Rush as his choice of keystone with Inspiration tree as his secondary.

For the first 15 minutes of the game, the two top laners saw no action. Gragas, who naturally has more sustain than Sejuani through his abilities, led by as much as 30 CS and was up in gold. Taking the top tower at 13:46, Bai “369” Jia-Hao was well in the lead of his counterpart.

When both teams grouped around objectives however, Flandre’s Sejuani showed up bigger. As the third dragon spawned, 369 crossed enemy lines in an attempt to flank them from an angle.

However, when he peeked out to throw a Barrel Roll, 369 gave away his own position. Recognizing that he was completely cut off from the rest of team, Flandre threw a point blank Glacial Prison for the pick off. With a numbers disadvantage, Top Esports retreated as Flandre helped his team secure a free Soul Point dragon.

Even without his ultimate, Flandre proved he was the better top laner in this game. Around the dragon pit once again, Edward Gaming had their eyes on the Mountain Soul.

Hanging out in Top Esports’ jungle, Flandre’s Sejuani was spotted out by a Vision Ward. He cleared it, and continued to hold that angle because Top Esports did not respond to his position.

Even without his ultimate, the moment Flandre saw an opportunity, he jumped on Top Esports’ backline, landing right on top of Yu “JackeyLove” Wen-Bo’s Tristana.

Sejuani’s role in these team fights is to land Winter’s Wrath on an enemy so that the team can follow up quickly to trigger Permafrost at max stacks. This is exactly what Flandre did in this instance, which allowed Edward Gaming to obliterate Top Esports’ main damage source at the start of the fight.

Taking out four members of Top Esports, they secured Soul, reset, aced Top Esports in their own base, destroyed the mid lane inhibitor, wrecked the remaining two towers, and finally the Nexus for the win.

Edward Gaming went on to sweep Top Esports 3-0, and will meet FunPlus Phoenix in the semifinals on Sunday April 11 at 5 p.m. GMT+8 live on Twitch.

READ MORE: FunPlus Phoenix’s pincer strategy looks like something out of the movie, Tenet