Finn’s message to Nuguri: ‘Next time, I hope we can make it a bit more spicy’

The Rogue top laner has words for DAMWON’s top laner. 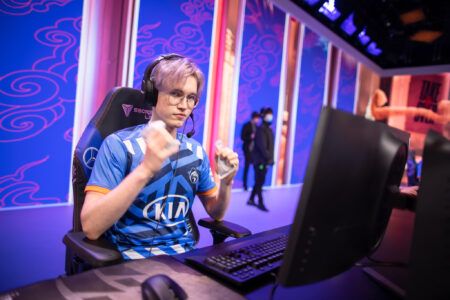 DAMWON may have won the match, but the rookies from Rogue managed to showcase exceptionally clean plays against the Korean team.

The team’s top laner told ONE Esports that Jang “Nuguri” Ha-gwon’s Lulu on top was “a bit unexpected.”

“I think we knew about it slightly,” said Finn when asked about the Lulu pick. “I didn’t expect them to pick it. It for sure has a place because it’s a good matchup early into GP, and with Graves it allows her to buff him up and let him do whatever he wants.”

Before coming to Worlds, Finn has expressed an interest in facing off Nuguri in the top lane. However, the Swedish player seemed to be underwhelmed by their first match.

“They played very well. I hope just next time we play each other we’re gonna have a more fun match-up, because this top match-up is quite boring to play for the both of us. It’s a very similar play style over and over, so next time I hope we can make it a bit more spicy,” said Finn.

Interestingly enough, the first day of the Group Stage started out in a fast-paced manner as teams finished their matches in less than 30 minutes or so.

“I think the strong teams like to draft early game compositions while I think teams that aren’t as confident in their ability to close out games will draft a bit more scaling,” explained Finn.

“That’s why we see teams like DAMWON still drafting very heavily fighting early game champions. But I think it just depends from team to team. I think their drafting style tells a lot about their players as well.”

Rogue were placed in Group B, where they have to play against terror teams DAMWON Gaming and JD Gaming. While many consider Group B as the “group of death,” Finn is confident that his team will make it out of groups with a 4-2 standing.

ONE Esports asked the 21-year old top laner to predict the scores for their Group and he made a bold claim that DAMWON Gaming will emerge unscathed.

From playing on the academy team last year, Finn has leveled up this 2020 as Rogue’s top laner. He has shown European fans insane plays during the Summer Split which contributed to Rogue taking first place in the Split and the first team to qualify for Worlds this year.

A huge part of Rogue’s success may have come from their jungler Kacper “Inspired” Słoma, who Finn believes is the actual reason they were first in the league.

Meanwhile, during his quarantine days, Finn has achieved Master rank in the Chinese superserver. He claims anyone who plays on the said server will “become a better player overtime.”

“It was very fun to play,” he told ONE Esports. “Everyone is pushing themselves to the limits and there’s a lot more fighting going on. Not just random fighting but just fighting for everything, compared to European solo queues I think if you play a lot in the Chinese server you’ll become a better player overtime just because it gives you more practice in every single aspect of the game — from laning phase, to mid game fighting, to late game.”

Finn’s girlfriend, Julia, was virtually with him all throughout his quarantine period and never faltered to show her support during this important event.

“It was very nice to have her, especially in the quarantine. It could be very depressing on a lot of days because she spends all her time alone, not talking to anyone. So just having her there, to have someone to talk to always, to understood what I was going through, it helped me through it,” admitted Finn.

We hope to see this couple at next year’s Worlds, similar to the support that FunPlus Phoenix Kim “Doinb” Tae-sang’s wife Li “Umi” You-Zi has shown during Worlds 2019.

Additionally, fans saw a fresh-looking Rogue during the first day of the Group Stage with their silver hairdos. The whole team agreed to dye their hair and get different haircuts after the confirmation that they have qualified for Worlds. Like a person who changes their do after a breakup, Rogue’s new look signifies more than just a change of color.

“I guess in a way we kinda left the old Rogue behind Europe and we want to show a better Rogue at Worlds,” explained Finn. “I think a lot of us, especially me, have a lot of regrets leaving Europe and leaving Playoffs. So at least for me I’d like to show that I’m a new player on the Worlds stage and that I can show a lot more than I’ve shown in Europe.”

The team’s tagline, “Go Rogue,” means to go berserk or to wreak havoc in its literal sense but for Finn it means “defying expectations.”