The head coach hypes up his super rookie. 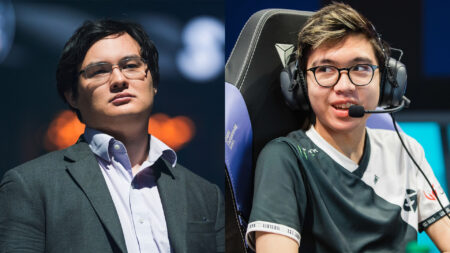 As the 2021 LCS Summer season heads into the LCS Championship Playoffs, Evil Geniuses continues to be a dominant force in the North American league.

Despite having a rough 0-3 start to Summer, EG found their consistency in the middle of the season, forging an eight-game win streak against the likes of 100 Thieves and Cloud9.

Head coach of Evil Geniuses Peter Dun believed that the team finally found its balance with the promotion of Kyle “Danny” Sakamaki.

In the ninth and final week of Summer, EG locked horns with Cloud9 once again. The matchup was critical, for winning meant a top three finish for EG.

The EG squad stayed resilient throughout Cloud9’s aggressive engagements. Though Danny was pinned by Luka “Perkz” Perković’s Yasuo and Robert “Blaber” Huang’s Diana at the 24-minute mark, the Aphelios player popped his Stopwatch to stall out the attack.

Once he flashed to safety, Danny led the retaliation with a quick kill on Blaber. =Daniele “Jiizuke” di Mauro’s Twisted Fate followed up with the perfect Gold Card on Cloud9’s Perkz, assisting Danny in the double kill.

Jiizuke was an important factor in maintaining map control for the EG squad, as he utilized Destiny to roam around the map.

Once Cloud9 rotated to punish Jeong “Impact” Eon-young’s Gnar, Jiizuke continued his split push in the top lane, and claimed the second inhibitor of the game.

Evil Geniuses closed the match out with an elaborate play near the mid inhibitor.

Baiting out Diana’s Moonfall, Impact’s Mega Gnar entered the fight with Crunch, and used Gnar! to slam the Cloud9 duo into the wall. With the rest of the team securing three kills, EG went straight for the Nexus to claim the win.

When asked about the team’s stellar rise in Summer, Evil Geniuses Peter Dun mentioned that he had more time to be onsite with the squad. Back in Spring, the head coach ran into travel issues that delayed his move to the US.

2021 LCS Summer had a more grounded approach for Dun since he was present right from the start. He recalled their three-week preseason boot camp as one of the biggest upgrades for the team.

“Being there for the preseason was important because that’s where we put our fundamentals in place, which are helping the team to find success right now,” said Evil Geniuses Peter Dun.

Despite 2021 LCS Summer being Danny’s first-ever pro split, the 17 year-old AD carry led the league in total kills (111). With such a strong impact in a short amount of time, the EG head coach praised him as a top player alongside 100 Thieves’ Victor “FBI” Huang.

“I’ve been surprised in a good way,” commented Evil Geniuses Peter Dun. “He’s just playing the game and not the nameplate. If he keeps improving as a rookie, there’s no limit to how far he can go.”

According to the head coach, Danny’s rising performance was the result of the rookie’s daily efforts during one-to-one sessions with the coaching staff and players.

Bot lane partner Lee “IgNar” Dong-geun took time to refine Danny’s playstyle in the first three weeks of 2021 LCS Summer. With the duo building a new kind of chemistry, Dun said that it unlocked IgNar as a stronger roaming support.

“What makes Danny really stand out is that he now has his own ideas, and he’s not afraid to bring those ideas,” said Evil Geniuses Peter Dun. “I think it’s a mark of respect for the rest of his teammates that even though they’re veterans, they’re willing to listen to his ideas.”

Evil Geniuses Peter Dun also elaborated on how the team works through reviewing their gameplay. With Jiizuke and Impact being the most vocal members, the head coach often acts as a mediator between the two to facilitate a healthy discussion.

Dun mentioned that they are avid fans of other competitive scenes, with Jiizuke frequently watching the LPL and Impact doing the same for the LCK. Having two different perspectives on gameplay, the two brought a “fire and ice” dynamic towards reviews.

While Jiizuke and Impact have no trouble expressing their thoughts, Dun still makes sure that the 25-minute scrim reviews are helping the entire squad.

“In a team that has Jiizuke and Impact, it’s important for me as a coach to make sure the quieter voices are heard,” said Evil Geniuses Peter Dun. “I get information from those players in one-to-one sessions and make sure they get their say in future reviews.”

You can catch Evil Geniuses during the 2021 LCS Summer postseason on the official LCS Twitch and YouTube channels.