Everything you need to know about Lillia, League of Legends’ new Jungle skirmisher

She was born from a magical tree that gathers people’s dreams in its flowers. 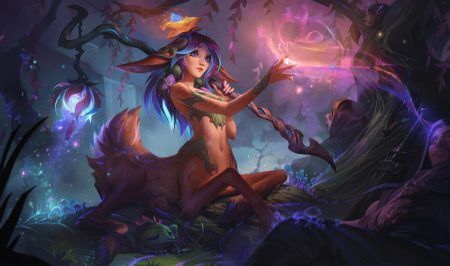 League of Legends newest champion is Lillia, a skirmisher jungler that bloomed from a magical tree in Ionia.

She will be released in patch 10.15, together with Riot Games’ latest Spirit Blossom Festival skin line.

When Lillia’s splash art was teased, some Summoners thought she was a fan art of Neeko, or even Neeko herself due to their very similar hairstyle, purple hair color, flower in hair, and large, glistening eyes.

Others thought that she looked like a combination of Hecarim and Neeko, or even Enchantress from Dota 2.

Lillia’s release will come with a skin, Spirit Blossom Lillia, who ventures away from Neeko’s color palette.

According to Riot, some key differences are “a sakura bloom between two antlers… a hanamusubi knot around her leg, and her staff takes on a more ethereal appearance.”

Based on her champion design, she can deal a portion of a target’s maximum health, true damage, slow, and sleep much like Zoe’s Sleepy Trouble Bubble.

Her passive procs on all her abilities, which means that she is naturally effective against tanks who stack health.

Blooming Blows reminds us of Darius’ Decimate, except it has a larger AoE that deals true damage when enemies are hit on the edge, which amplifies her efficiency against tanks.

Sleep as a status effect was unique to Zoe. Now, Lillia’s ultimate, Lilting Lullaby, adopts a similar mechanic, and rewards players with bonus damage after the target has slept.

Role as a jungler

As Riot Games’ second release this year after Sett and three reworks, Wukong, Fiddlesticks, and Volibear, Lillia brings a breath of fresh air.

Based on Riot’s Champion Roadmap for June 2020, they expressed that jungle mains have been wanting a new jungler, and that in the design process, couldn’t decide if she should be an assassin or skirmisher.

In the end, they decided on a mid-range skirmisher. It remains to be seen how fast her jungle clear will be, and how compelling her ganks are pre-six, especially since she’ll only have the slow effect from Swirlseed for soft crowd control.

There’s also a possibility of flexing her top lane, similar to how Sett and Volibear have been played.

Hailing from Ionia, she’s from the same region as Irelia, Karma, Akali, Yasuo and Shen to name a few.

According to Riot’s Champion Insights, she was born from a magical tree that gathers people’s dreams in its flowers. The one time the tree had a dream of its own, it grew into a bud, which fell to the ground before it bloomed, and grew into Lillia.

She spent her life growing up in the forest with a tree for a mother, tending to her buds and incoming dreams.

When war erupted outside the garden and weakened it, Lillia encountered violent humans for the first time. It changed her, and made her want to leave the garden to brave the outside world.

With that, she made it her quest to help humans realize their deepest wishes with hope and joy.