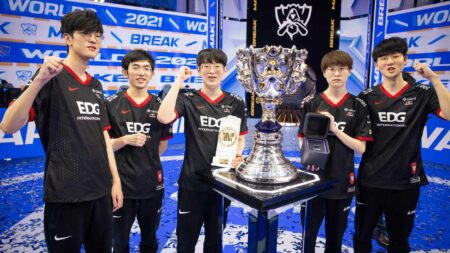 This is the esports organization’s second international title after MSI 2015. To celebrate their victory, Edward Gaming’s players will also get the chance to select which champions they want Worlds skins for, and work with Riot Games to personalize them.

The Worlds skin line has been a tradition in League of Legends for the past 11 years, where Riot honors each team’s World Championship victory, forever immortalizing them in-game.

In the post-finals press conference, Edward Gaming’s players revealed which champions they are considering for Worlds skins.

Edward Gaming’s top laner Li “Flandre” Xuan-Jun has Graves and Jayce in mind for his Worlds skin. Out of a total of 21 games played at Worlds, Flandre used Graves 11 times, and Jayce five times.

For someone who told ONE Esports in an interview during Worlds 2021 that “Graves is not a very good pick”, he sure is successful on him. Graves became Flandre’s most used and best performing champion in the tournament with a 72.7% win rate.

While Zhao “Jiejie” Li-Jie didn’t give an exact answer during the post-finals press conference, Edward Gaming’s jungler did say that he wanted a champion that “represents him” for his Worlds skin.

This Worlds 2021, he played Jarvan nine times, and Xin Zhao five times, both of which are good candidates, especially since he only used Lee Sin, Talon, and Olaf twice.

Since we already have a 2011 Fnatic Jarvan skin, League of Legends fans can hope that JieJie picks Xin Zhao instead.

Mid laner Lee “Scout” Ye-chan, the MVP of this year’s Worlds 2021 finals, also did not give a clear answer as to which champion he would choose for his Worlds skin, but did mention that he’s eyeing a champion he used in their series against DAMWON KIA.

This narrows it down to Ryze, LeBlanc, Twisted Fate, or Zoe.

Since Ryze already has an SK Telecom T1 skin from Worlds 2015, which was selected by none other than Scout’s former teammate Lee “Faker” Sang-hyeok, while LeBlanc already has Invictus Gaming’s Song “Rookie” Eui-jin written all over her since Worlds 2018, League of Legends fans should pray that Scout chooses Twisted Fate or Zoe.

He has used these three champions at least thrice this Worlds 2021, and held a 100% win rate on Ezreal.

Out of these three AD carries, emo boy Aphelios has the least amount of skins to his name, so Viper, you know what to do.

Since Riot Games brought back the enchanter meta this Worlds 2021, we now have more support skin options!

Tian “Meiko” Ye, Edward Gaming’s longtime support player, has three options in mind for his Worlds skin, namely Lulu, Yuumi, or Nami, which he used a total of four times each this Worlds 2021.

Nami already has an SK Telecom T1 skin from their championship win at Worlds 2016 thanks to Lee “Wolf” Jae-wan, so hopefully Meiko’s choice in Lulu or Yuumi would please League of Legends fans.

Follow ONE Esports on Facebook for more updates on League of Legends, LoL esports, and the LPL.