DRX Doran on JDG’s Kanavi: ‘He’s got an ego out of this world and we’re going to bring him down’

The DRX top-laner is ready to win. 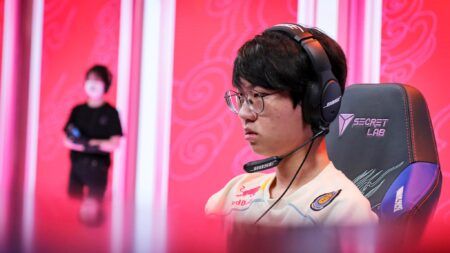 The League of Legends World Championship (Worlds) has wrapped up its first round-robin of the group stage. With an essential win over LCS team FlyQuest, DRX landed a spot in the top 2 of Group D and we were able to ask DRX top-laner Choi “Doran” Hyeon-joon some questions after the game.

With Doran going against Colin “Solo” Earnest’s Ornn, he was able to pull an incredible showing with the counter-pick of Maokai. When asked about the decision, he merely said that the team needed a tank.

“Ornn was one of the meta picks going into the top-lane and I thought Maokai was a decent champion to play into the Ornn,” stated Doran. “With a few practices, we were able to pull it off and even try it in a competitive game.”

With it being his first time facing regional teams on the Worlds stage, Doran was surprised at how the other regional teams in Group D actually played the game. Despite coming from a fairly competitive region like the LCK, teams from the LPL, LCS, and the CIS had a different way of interpreting match-ups and prioritizing different kinds of champions.

When asked about his relationship with coach cvMax who’s regarded him as a good friend, the DRX top-laner reciprocated and believed that they’ve grown to have an understanding on and off the Rift.

“When we’re playing games or competing, we put our personal emotions aside even when the feedback becomes emotionally driven,” stated Doran. “But in real life, we hang out as if we’re good friends and we have a lot of fun together.”

As one of the strongest teams coming onto the Worlds stage, many other team players are quick to put DRX on their hitlist. Seo “Kanavi” Jin-hyeok of JD Gaming recently heated things up by saying he’ll go “full tryhard mode” if he faces DRX, but Doran easily took on the challenge.

“I guess he’s been playing in LPL for a long time and he’s been winning a lot so I guess he’s having a big ego,” replied Doran. “He’s up over the earth and DRX is going to bring him down.”

Seeing as how Ryu “Keria” Min-seok and Kim “Deft” Hyuk-kyu sported some colored hair throughout the group stage, we were able to ask Doran if he has any plans to hit the hair salon for a new look. Unfortunately, Doran confirmed that he’ll keep his hair the way it is for the remainder of his professional career, but once he retires, he might dye it blue.

Last, but not least, we were able to ask Doran his own recommendation of a Korean dish for his English fans and viewers.

Doran and DRX will be playing their second round-robin on October 11.