The boys in black return to glory. 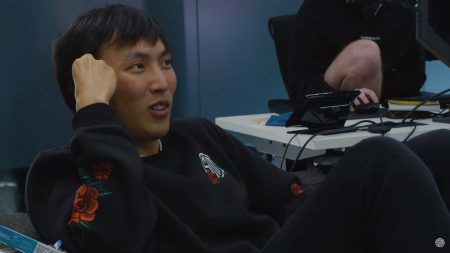 With the LCS Summer Split finishing its eighth week, TSM has pushed themselves back into the top three of the league with a triumphant win over rivals Cloud9.

Aside from a few scrappy kills in the early game, both teams focused their efforts on bigger team clashes around specific map objectives like the Drakes.

With TSM knowing that their biggest threat is Eric “Licorice” Ritchie’s multi-stun Kennen, the team did their best to bait out his Slicing Maelstrom.

Though Spica and Sergen “Broken Blade” Çelik’s Irelia fell as the team’s frontline, Doublelift easily cleaned up from the back-line with an easy triple-kill.

The two teams met up once again at the dragon pit for the third drake. Instead of cautiously waiting for TSM to attack the Drake first, Cloud9 want all-in to secure Ocean Drake first before the clash began. After the capture, Robert “Blaber” Huang’s Volibear started the clash with a Stormbringer, doing his best to clamp down TSM’s main damage output, Doublelift.

To counter the thundering blow, Spica’s Sett dealt another team-crushing Showstopper onto C9’s backline, prompting the rest of TSM to go all-in for three kills on the board.

With one last hurrah, Cloud9 tried to thwart TSM’s botlane push with an all-out clash. Although Spica’s Sett performed a defensive Showstopper on Licorice’s flanking Kennen, things worked in favor of C9 with his Slicing Maelstrom stunning both Sett and Doublelift’s Caitlyn.

Blaber’s Volibear hastily came in with a Sky Splitter and Stormbringer that led to Doublelift’s first death, but Broken Blade’s Irelia and Soren “Bjergsen” Bjerg’s Twisted Fate easily picked up the fight into a near-ace finish. With only Blaber alive, the four-man TSM squad rushed to the Nexus for a glorious win over their long-time rivals.

With this win, TSM hands Cloud9 their third loss in a row, leaving both teams head-to-head on the leaderboard with an 11-5 standing. The match win also minimalizes C9’s chances of reclaiming first place from Team Liquid (13-3).

With TSM and C9’s standings, the two teams have to claim two more wins and hope that TL goes winless for the next two games in order to end the season in a first-place tiebreaker.

You can catch TSM in their next match against Golden Guardians on August 8, 10 AM (GMT +8).