DragonX is flying high after a monumental win. 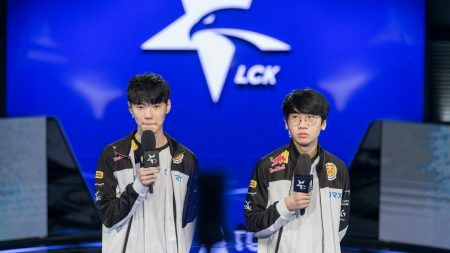 DragonX continues its reign in the LCK with another victorious match win against Gen.G, pushing them further into first place with a five-game win-streak.

Game one was a definitive game for Jeong “Chovy” Ji-hoon and his Galio. He had to face Gwak “Bdd” Bo-seong’s long-ranged Zoe, but Chovy’s mid-tank pick became a useful tool in team clashes.

By the 29-minute mark, DRX executed an insane wombo-combo in the bot-lane brush, unleashing Camille’s Hextech Ultimatum, Galio’s Hero’s Entrance, and Volibear’s Sky Splitter and Stormbringer all at once. DRX walked out of the clash with three kills and a secured Infernal Drake.

Though things were looking bleak after a failed clash in the bot jungle, Chovy’s Galio turned the tides with an incredible four-man taunt on Gen.G, grabbing a double-kill with Hong “Pyosik” Chang-hyeon’s Volibear biting down on Kim “Life” Jeong-min’s Leona. With Choi “Doran” Hyeon-joon’s Camille already inside the base, Chovy teleported in and secured the game one win.

Gen.G eventually tied the score with a game two win, but Doran’s Kennen came to be the X factor in the third and final game. By the 28th minute, Kim “Clid” Taemin landed Sejuani’s Glacial Prison on Chovy’s Twisted Fate, but luckily enough, Ryu “Keria” Min-seok’s Rakan knocked up the incoming enemies in front of the frozen TF.

With Gen.G congregating in a small area, Doran’s Kennen unleashed his Slicing Maelstrom and secured three kills for DRX before falling to Park “Ruler” Jae-hyuk’s Ashe.

In the final clash of game three, Doran came through another definitive play that secured the series win. While both mid-laners received an early check-out, DRX was sandwiched in the mid-lane between Kim “Rascal” Kwang-hee’s Camille and the rest of Gen.G.

Even with such a flank, Doran’s Kennen flashed in with another Slicing Maelstrom and took down three of Gen.G with the help of Rakan’s Grand Entrance. With only Clid’s Sejuani left to defend, the rest of DRX overpowered the lone jungler to secure the ace finish.

“I have this desire to excel in every department,” stated Chovy when asked about his stand-out qualities against other top LCK mid-laners. “Even if I bring a plan to face up against Heo “ShowMaker” Su, I believe that won’t work so I have to focus on the performance and mechanics.”

DragonX will face another worthy opponent in DAMWON Gaming this Thursday, at 7:00 PM (GMT+8).