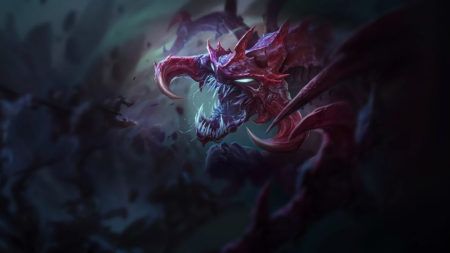 “Have you ever seen such a small cow?” asked the Mandarin LPL shoutcasters as JD Gaming top laner Zhang “Zoom” Xing-Ran’s Cho’Gath dwarfed his support Alistar and everyone else around him.

Creeping into the top lane meta is an unexpected champion that has been sleeper OP. Since Goredrinker and other life-giving preseason items were nerfed, Camille, Aatrox, and Renekton have dropped in priority.

Rising to fill the gap are buffed champions Gnar and tank Gragas. Buffed at the end of last season, Gragas’ passive Happy Hour increased in healing from 6% to 8% maximum health, while the reduced cooldown of Drunken Rage overall made him more tanky. By far the strongest top laner at the moment, he has an overall 53% win rate this Spring 2021 season.

Like all meta shifts, champions that oppose the best in their role also start to surface as pro players strive to find any advantage they can. As a result, Jayce came back into the meta for his poke, burst, and lane dominance, while Gangplank enjoys farming and scaling alongside the tanks.

A less mechanical, beefy, crowd control giant, Sion — despite being neither buffed nor nerfed this season — became the most popular choice. Picked a total of 93 times so far in the major leagues, his win rate however, has been negative at 43%, a full 10% lower than Gragas.

Experimenting with more alternatives, the newest answer to top Gragas that’s been catching on with pros is none other than the monster of the Void, Cho’Gath. Though slightly nerfed on patch 11.1 and 11.3, only the base damage of Vorpal Spikes was reduced at later levels.

The first time Cho’Gath appeared in a major league this Spring 2021 was in LEC Week 3. Excel Esports last picked Cho on red side for their top laner Felix “Kryze” Hellström to go up against Misfits top laner Shin “HiRit” Tae-min’s Jayce. Though he trailed in CS in the laning phase, his presence in team fights made a big difference.

Kryze played Cho’Gath again the following week against Gangplank in their game against Vitality. In fact, in the three LCS games Cho was selected thereafter, teams chose him entirely as a response to Gangplank, as both champions scaled into late game.

It wasn’t until LPL Week 8 that Cho’Gath made his debut in China against a different foe. Bilibili Gaming’s top laner Yu “Biubiu” Lei-Xin faced off against Chen “Ziv” Yi’s Sion. In the same week, in JD Gaming’s high profile series against league leaders Royal Never Give Up, they took a risk in game two, and last picked him after giving away Gragas over to Li “Xiaohu” Yuan-Hao.

In the first 20 minutes of the game, both top laners were left on an island to farm with a 0/0/0 scoreline. Zoom however, had almost 40 CS more than Xiaohu, who opted to play AP instead of tank Gragas.

The extra gold meant that Zoom had two completed core items in his inventory compared to Xiaohu’s single Everfrost. Opening with a 3-man knock up with Rupture (Q), Zoom caught RNG in the choke point, and continued to lead the charge as Lee “LokeN” Dong-wook picked up a double kill.

Just two minutes later, even though RNG managed to eliminate JDG’s AD carry early in the fight, it simply wasn’t enough. Whether it was walking up to Chen “GALA” Wei’s Kai’Sa with Iceborn Gauntlet into Rupture, or chasing down Shi “Ming” Sen-Ming’s Leona with Dead Man’s Plate, Zoom cleaned house every time.

An absolute monster, RNG just could not deal with Zoom’s 5,200 HP 6/0/6 Cho’Gath in the late game. Earning his second straight MVP, Zoom led JD Gaming to sweep Royal Never Give Up 2-0.

“In ranked, I’ve never eaten and gotten so big on Cho’Gath before. I performed better than normal,” Zoom said in the post-match interview.

Just when you thought top lane Cho’Gath is the optimal way to play him, two more games across the globe in LEC and minor region PCS on the same fateful day on March 14 proved everyone wrong.

Flexing Cho’Gath to support, Rogue and PSG Talon paired him with fasting Senna. At bot, Cho takes all the CS while Senna collects Mist Wraiths passively — a win-win situation, for Cho needs the farm in order to become a tanky asset in the late game.

In total, Cho’Gath has been played seven times in the four major leagues with a 100% win rate. How long will his perfect streak last? Will Vayne start to get picked more in order to deal with his mass?