In Coach Chawy we trust. 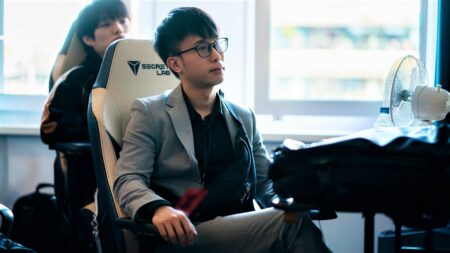 Let’s take a closer look at the strengths of each team.

Key players to watch for in the Worlds 2021 Finals

For anyone that’s seen DAMWON KIA play, you should know that Showmaker is one of the best if not the best Mid laner in the world right now. But, one does not become the best Mid laner without the support of your teammates, mainly the Jungler. And, while all eyes are on ShowMaker and his showmaking skills, you can’t forget the aggressive plays that Canyon is so good at. From invading the enemy jungle, to ganking mid, to diving side lanes, this guy is everywhere creating advantages for Damwon.

As for Edward Gaming, their bot lane is the most feared bot lane around right now. They will take fights starting from the laning phase, to mid game, to end game. Viper will rush forward as an ADC to deal damage while Meiko provides all the support he needs.

Both mid laners will look to play champions that can work well with ganks and are able to solo carry the game. Scout has had good results playing Ryze paired with Jarvan in the jungle and no doubt he will pick it if open. While ShowMaker will most likely pick Syndra against Jarvan and Ryze and force lots of 2v2 3v3 at the mid lane.

I suspect EDG will prioritize Jarvan while DK will look for an early Leesin pick. Both champions are able to solo jungle without a leash letting the laners focus on laning. Both picks are great at controlling the game flow and do well in skirmishes.

Lucian will definitely be seen in the Grand Finals as EDG has had so much success early picking Lucian and letting Viper hard carry.

What to expect in the Worlds 2021 Final

Look out for lots of fighting in the top mid part of the map. EDG made it to the Finals by supporting Scout in the early game. DK will likely do the same as they definitely don’t want to go head-to-head against EDG’s bot lane.

Additionally, expect lots of skirmishes and team fighting. DK knows the macro, EDG knows the fight. DK will want to control the Dragons, the heralds, and the Barons, but EDG will not make it easy for them. Definitely look for EDG to bring the fight to DK.

I expect Edward Gaming to put up a good fight, but overall I believe DAMWON KIA has better macros and team fighting skills will help them emerge victorious.