Bard, Gnar, and Poppy’s new Astronaut skins are out of this world All three are wearing white space suits complete with customized helmets for each champion.

Bard’s flute-like weapon has been transformed to fit the theme, and his helpful Meeps spirits have turned into adorable, tiny green aliens that fight by his side.

Bard’s second ability Caretaker’s Shrine has been converted into a mini unidentified flying object (UFO), while his third ability Magical Journey now spawns what seems to be the entrance to a spacecraft.

On the other hand, Gnar looks simply adorable in his small spacesuit, with a helmet that snuggly fits his large ears.

All that clothing will be ripped off into shreds, however, whenever he goes into his Mega Gnar state. Astronaut Mega Gnar appears ferocious in his green skin complete with glowing particle effects.

The yordle Poppy stands proud in her own suit, carrying her mighty hammer which leaves glowing marks when used.

These new Astronaut skins feature a unique and entertaining recall, where Bard, Gnar, and Poppy get sucked into a UFO. 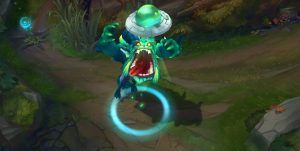 These skins will be hitting off the Public Beta Environment (PBE) soon, and later will go live on the League of Legends client.