After almost a year, Chovy’s mid lane Aatrox is back

The Darkin Blade lives on. 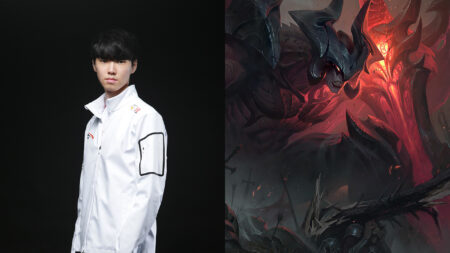 Jeong “Chovy” Ji-hoon had a stellar Aatrox performance in game one of Hanwha Life Esports’ match against Afreeca Freecs in the second round robin of LCK Spring 2021.

Despite being an all-time favorite for the mid laner, he last played Aatrox on April 2020 (323 days ago), where he defeated Lee “Faker” Sang-hyeok’s Rumble.

Against Song “Fly” Yong-jun’s Syndra, Chovy played safe for the first fifteen minutes of the game against the mage’s long-range attacks.

Once he completed his Mythic item, Stridebreaker, the Aatrox expert was on the hunt for his first kill. With Kim “Kiin” Gi-in’s Gnar pushing the bot lane, Chovy chased the top laner down and grabbed a solo kill with the first strike of the Darkin Blade.

After being spotted while trying to clear a control ward, the Aatrox player popped his World Ender ultimate and finessed his way through the mid lane, throwing out his skills and dodging attacks from four members of Afreeca Freecs.

To escape the 1v4 situation, Chovy combined Umbral Dash with the Darkin Blade to traverse the wall and catch Son “Lehends” Si-woo’s Rell in the knock up, even assisting his squad in the kill as he walked out of the fight.

In a three-man attack in the mid lane, Chovy flashed in to catch Fly in Infernal Chains. With Oh “Vsta” Hyo-seong’s Thresh hook landing right after, Kim “yoHan” Yo-han’s Nidalee pounced on the Syndra player for the kill.

Hanwha Life Esports closed out the game with a double flank by Chovy and Park “Morgan” Gi-tae’s Kennen.

As Morgan and yoHan deleted Fly in the backline, Chovy assisted in taking out Lehends once more and used an Umbral Dash-Flash combo to slice through Bae “Bang” Jun-sik’s Kai’Sa. While the rest of HLE made their way to Baron, the Aatrox player teleported near the drake pit, fended off the remaining Afreeca players, and secured the Ocean Soul.

Chovy’s Aatrox ended the game with a 3/0/6 KDA and received a unanimous vote for the Player of the Game award. After securing another POG award in game two with Viktor, the HLE mid laner takes first place in the POG standings with 900 points.

“I think Aatrox looked really good with Stridebreaker since you can easily get fed,” said Chovy in the POG interview. “If you pilot it well and stay 50/50 in the mid lane, it also opens up more space for the top laner so it’s really good for the team as well.”