He possesses the Golden Left Hand. 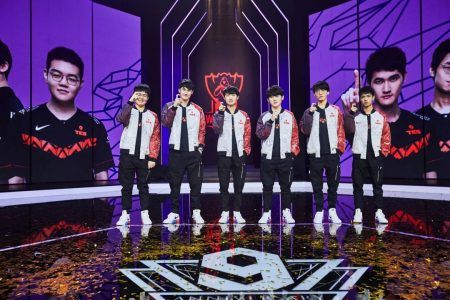 The League of Legends Pro league (LPL) Summer final saw a rematch between two superteams, Top Esports and JD Gaming. As expected, it was another tight series spanning a full five games.

In Summer, Top Esports got their revenge over JD Gaming for the title, with mid laner Zhuo “knight” Ding as a major contributor.

In game five, when the championship was at stake, when Worlds seeding was on the line, when everything came down to a single game, Top Esports found themselves down four kills to JDG’s ten, two turrets to JDG’s four, and trailed by more than 2,000 gold 28 minutes into the game.

The TES player with the most kills so far was Hung “Karsa” Hao-Hsuan on jungle Graves, with a KDA of 2/1/1.

On the opposite end of the Rift, JD Gaming held gold bounties, perfect KDAs, and possessed three completed items on three of their champions compared to only two and a half items on TES’ side.

The only thing Top Esports had going for them was dragon control. Every single dragon was secured by TES, which gave them Cloud Soul.

As Elder Dragon was about to spawn, it was a critical moment for both teams. JD Gaming were looking to deny the Elder Dragon buff, while Top Esports were eager to make a comeback if they managed to acquire it on top of Soul.

A vital factor here is that the minion waves were about to meet in the mid lane, and neither team was needed in the lane to wave clear. This gave teams time to set up and clear out vision.

Top Esports placed three vision wards down at the Dragon pit, mid lane’s side bush, and the small bush in the river. Being on red, the terrain gave them easier access to the pit.

The way JD Gaming was forced to enter the area from blue side meant that they could only match and challenge two of TES’ wards (for any ward placed in the Dragon pit would have been easily cleared out) and had no further vision beyond that line.

Because TES had already established their position in the river, it gave them the opportunity to set down prior vision in the small bush. Not to mention, Yu “JackeyLove” Wen-Bo on Ashe, their longest range champion, was in the perfect position to clear out JDG’s ward, and altogether, TES were already steps ahead of their opponent.

After JackeyLove finished off JDG’s vision ward in the small bush, Seo “Kanavi” Jin-hyeok was two hits away from taking TES’. On Kindred, he had 500 range compared to Ashe’s 600, and had to step closer to the ward in order to auto attack it down.

Now watch where knight is in that moment. It was the only area which JDG could not ward because they could not contest vision across the wall — within the Dragon pit.

Completely out of JDG’s vision, knight surprised with a Dark Sphere into Scatter the Weak that stunned Kanavi’s Kindred and LvMao’s Sett. Immediately, Liang “yuyanjia” Jia-Yuan on Leona followed up with Solar Flare into an Enchanted Crystal Arrow from JackeyLove for a perfect crowd control chain.

In three seconds, knight helped his team eliminate two out of five opponents as a huge objective was about to spawn.

After tying up loose ends which left only Zhang “Zoom” Xing-Ran standing, Top Esports downed Elder Dragon and swiftly moved on to Baron.

With two of the best buffs in-game, Top Esports plowed down mid lane for the inhibitor and a Nexus turret.

As both teams took a breather, six minutes had passed, and another Elder Dragon was on the table.

The first thing Top Esports did was catch out Sett and Kindred by trading Enchanted Crystal Arrow and Solar Flare for Lamb’s Respite. Even though they spent two ultimates for one, it was worth it because it meant two JDG members’ health bars were low and they did not have a clutch Lamb’s Respite for the next fight.

In response to TES’ positional and vision advantage, JDG wrapped around from bot lane. As Zoom teleported in in Mega Gnar form, Top Esports backed off from Elder.

Again, watch where kinght was positioned this whole time.

Because TES almost claimed two lives seconds earlier, they established vision control around the area. Even though Lee “LokeN” Dong-wook placed a Farsight Alteration trinket behind the Dragon pit and spotted out kinght’s Syndra, once cleared, knight continued to stay out of JDG’s sight in their fog of war.

Like a replay from a different angle, knight bursted down Kanavi’s Kindred from behind the wall just as Karsa went in for the steal.

With Elder buff and four members down on JDG, Top Esports finished the Nexus for their first ever domestic LPL title.

Topping the charts with 11 MVPs in Summer, knight was awarded the regular season and finals MVP.

The Summer championship also means that Top Esports will be LPL’s first seed at the World Championship in Shanghai in October, while JD Gaming will be seeded second.

This is the second championship in a row after the organization’s first at the Mid-Season Cup. Can knight and the rest of Top Esports make it three?