He rolled a nine against Edward Gaming. 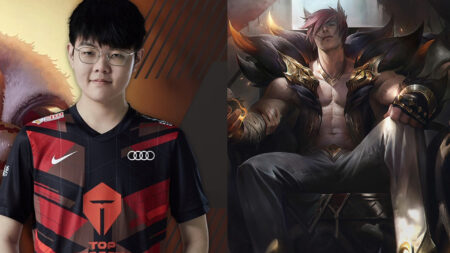 Just last week, Edward Gaming lost to Royal Never Give Up in the battle for first place. Against the Summer 2020 LPL champions, they still had more to prove.

After Top Esports took a resounding game one win on the back of Yu “JackeyLove” Wen-Bo’s signature Draven, Edward Gaming came back with better team fighting in game two to even up the series.

In the deciding game three, both teams were almost even. While TES were leading by about 3,000 gold and were at Soul Point, EDG were not far behind with two dragons, including an infernal.

At the 30-minute mark, before the sixth dragon spawned, both teams were hovering around mid. Recognizing an opportunity, Li “Flandre” Xuan-Jun blew Ornn’s horn, knocking up three opponents with his ultimate.

Hung “Karsa” Hao-Hsuan’s Udyr was the nearest, and therefore the target EDG chained their crowd control on. Isolated from the rest of his team, EDG took out the jungler and set up a favorable 4v5 situation.

However, Bai “369” Jia-Hao had other ideas. Flandre may have saw a opportunity at the start of this fight, but in this clutch 1v5 moment, 369 saw an even bigger one. Literally.

Following up on knight’s 3-man stun, 369’s Sett found himself side by side Flandre’s Ornn. Grabbing him with The Show Stopper, he flung the best target — the tank, of which 60% of his health was converted into damage via Sett’s ultimate — into three members of EDG, obliterating their health bars.

Realizing that their top laner had seized a key moment, JackeyLove’s Tristana immediately jumped over the wall. Wang “Zhuo” Xu-Zhuo’s Alistar too, chimed in, making it a 3v5. With one last fully charged Haymaker, 369 lived, and together, TES took down four members of EDG, and pushed into their base for the series win.

For rolling a nine on Jayce in game one and Sett in game three, 369 earned both MVPs.