This is the City of Freedom’s cream of the crop. 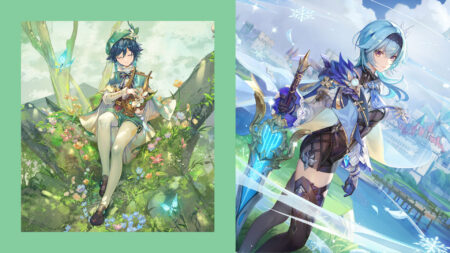 Mondstadt is Teyvat’s Germany-inspired city. It is known as the City of Freedom, associated with the Anemo element.

Mondstadt is called home by a majority of Genshin Impact characters, and is the place where all players start their journey.

Here are the five best Mondstadt characters in Genshin Impact

5. Fischl and Oz is the tandem you never knew you needed

She might be a 4-star character, but Fischl at her Constellation 6 (Evernight Raven) makes a handy support character. Her night raven, Oz, can attack enemies even when Fischl herself is not present on the field.

Fischl’s kit can work with almost any team, making her the most versatile among all Mondstadt characters.

4. Eula Lawrence shall have her vengeance

The vindictive Eula Lawrence is by far the best Cryo user out of all of Genshin Impact’s Mondstadt characters.

Eula has high burst, and deals a huge amount of damage to enemies as an S-tier physical DPS character.

Despite his cold facade, Dawn Winery’s Diluc Ragnvindr stands as one of the most powerful Mondstadt characters. Diluc is a very easy and straightforward Pyro user to play, especially compared to other Genshin Impact characters.

If you are looking for a decent and reliable character to use in the Spiral Abyss’ Cryo levels, Diluc is one of the best Mondstadt characters to pick.

2. Klee is the cutest of all Mondstadt characters

Arsonist, bomber, Mondstadt’s cutest little thing — whatever you call her, Klee is the best Pyro character living in Teyvat’s City of Freedom.

Klee is a top-tier Pyro DPS who just loves showering everything that she sees with Kaboom! bombs. Her button-spamming elemental abilities perfectly match her trigger-happy personality.

Klee can be a pretty difficult character to handle, especially since you have to position yourself and the Kaboom! bombs well to trigger elemental reactions. Once you get past this small hurdle, you’ll literally be saying “Bombs away!” to all of Teyvat in no time.

1. Venti is by far the best Genshin Impact character in Mondstadt

There’s no doubt about it — the Anemo element rules the humble city of Mondstadt, and so does its Archon Venti.

Venti is the best Anemo character out there, as well as the best Mondstadt character that will ever land in your party. You can do many things with his Elemental Skill, Skyward Sonnet, which can launch you or your opponents in the sky.

Venti’s Elemental skill can be used to gather multiple enemies in one place, and is a very efficient tool during the Spiral Abyss or co-op events. You can also utilize it to effortlessly reach elevated places to obtain treasure chests, oculi, or activate Elemental Monuments.

What’s more, his Utility Passive, Windrider, decreases gliding Stamina consumption for your own party members by 20%. Venti truly is the perfect companion for exploring Mondstadt.