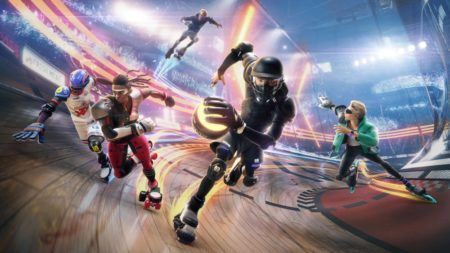 While new and quirky shooters continue to saturate the esports scene, Ubisoft has other ideas with its new game Roller Champions.

An esports title, the new roller-skates game is not just a straightforward skates-derby. Instead, this free-to-play player-vs-player game, which Ubisoft is launching in early-2020, sets two 3-player teams against each other in a roller-skates battle.

The objective of the game isn’t just about running laps — teams must also score goals to win the match. The rules of the game: take the ball, make a lap while maintaining team-possession, and score. The first to reach five points wins.

It’s very much like a mash-up between basketball and rugby, but on skates and without the dribbling.

In its official introduction at E3 2019, which had a limited-time playable Alpha Demo on Uplay, Ubisoft revealed how in-game arena fans also have a critical role. Gamers must catch their interest to start growing a fanbase to earn experience points. Only then can they unlock new gear, animations, and character customizations.

Roller Champions will only be available on the PC via Uplay.