Traditional sports and esports are crossing over, says industry heads

Perhaps in the future, esports will just be sports. 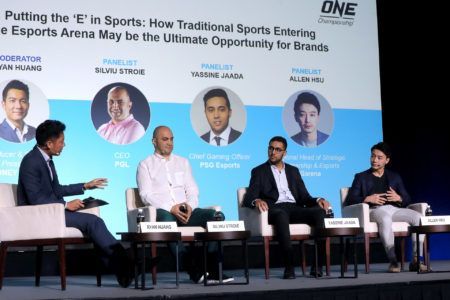 There’s plenty that esports has to offer traditional sports, such as showing advanced data instead of just traditional stats like goals scored, or field goal percentage.

This and more were discussed at the Nielson and ONE Championship industry panel on esports as part of its “What’s next in global sports” event at Marina Bay Sands last week.

Stroie pointed out how important statistics are to esports, with tournament broadcasts often showing advanced stats for each player or team. He also predicted that this could soon become just as prevalent in traditional sports with more advanced data being shown rather than just traditional stats like goals scored, or field goal percentage.

Esports audiences are used to the amount of data being given on screen at any time, from gold accumulated to average item purchase speeds in MOBA games, or accuracy and winrate with various weapons in battle royale matches.

In traditional sports, these could include more information such as the speed of a player over time, while also displaying the number of passes, overall positioning in the field and more — stats that usually aren’t shown.

Yassine Jaada, Chief Gaming Officer of PSG Esports, agreed that there’s more and more crossover between traditional sports and esports. Jaada shared that almost all of the PSG footballers also play video games, and that crossover games between the footballers and PSG’s FIFA esports athletes are common. Jaada also hinted that the PSG football team and the esports team could be involved in the same events in the future.

Other interesting nuggets revealed at the panel include the fact that there were 67 brand partners for last year’s inaugural season of the NBA 2K League. Of those 67, a massive 48 were non-endemic to gaming. We’ve seen similar sponsorships with other esports too with Coca Cola recently named the official non-alcoholic beverage of the Overwatch League, and Kit Kat sponsoring Overwatch team LA Valiant as their official candy sponsor.

Allen Hsu, Garena’s regional head of strategic partnerships and esports, spoke about how popular esports has become, referencing the recently-completed Free Fire World Cup, which he says, now holds the record for highest online viewership for a live event on YouTube, with over 1 million people from around the world tuning in.

Hsu said that the popularity of the event served to show that viewers see the hunger and pursuit of victory of esport athletes as no different to that of traditional athletes.