Could this be the future of martial arts competitions? 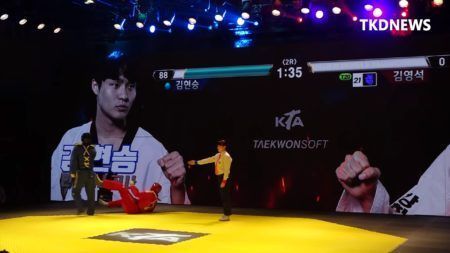 Rather than having viewers keep track of who’s winning through points, fighters wear sensors on their gear, which activate whenever they’re hit. The system then deducts points from their health bar accordingly.

The system has a few issues to work out in terms of response and latency, but this looks like a fun and engaging way for casual fans to watch and understand martial arts competitions.

The competitors seem to like it too. Third-place contestant, Kim Yong-sik, said he “found the system fun to use, and added that it made the match more colorful and dynamic.”

“We promoted this league in order to realize the basic value of martial arts Taekwondo and provide a new direction in the way of playing,” a KTA official added.

You can check out the full match here:

READ MORE: All the best plays from the Tekken World Tour Finals