The Sega Game Gear Micro is 92% smaller than the original

Only two AAA batteries are required to run it this time! 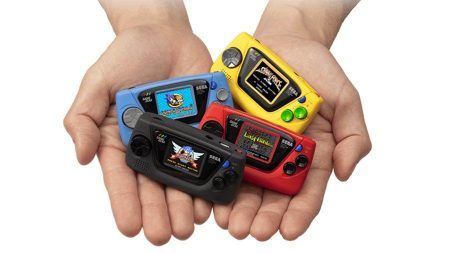 Sega’s classic 8-bit handheld console, the Game Gear, is making a comeback 30 years after its initial release, in a new Micro format.

This version of the console comes with four built-in games displayed on a 1.15-inch screen. It is not compatible with original Game Gear cartridges, however, four different variations of the console in different colors can be purchased, each containing a different set of games, ranging from action to RPG and puzzles.

There is also the collector’s edition Game Gear Micro Smoke model included in the Sega Store Limited DX Pack. It looks and feels exactly like the other Game Gear Micros, however, it does not turn on and cannot be played.

Pre-ordering all four functioning variants of the Game Gear Micro grants players a free Big Window to magnify and see the game clearer from the console’s tiny screen. The freebie will be a first-come-first-served basis at Amazon, Rakuten, and Sega Stores.

The console is included as goods released in commemoration of Sega’s 60th anniversary.