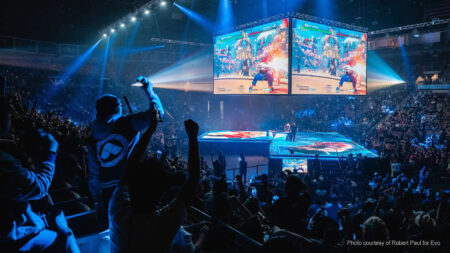 The Evolution Championship Series will return this year as Evo Online, a fully online competition that will pit the world’s best FGC players from afar on August 6-8 and 13-15.

The annual fighting tournament will have free entry in this year’s iteration and will allow players from select countries in North America, Europe, Asia, and Latin America to compete in four fighting games:

While the 2021 game roster looks quite limited, Evo has already stated that the tournament will be announcing more games to the official line-up soon.

With four titles across four regions, each Evo tournament will have a prize pool and a uniform structure of regional qualifiers, regional semifinals, and a regional top 8.

As for broadcasts, Evo has confirmed that there will be livestreams for the online qualifiers and the regional top 8, showcasing the region’s best and brightest fighters.

The online format may not exhibit the same community experience as previous Evo’s, but the team is looking to keep the tournament authentic and true to its mission.

“At its core, Evo will remain what it has always been: an open-format competition that gives fighting game fans from different countries a chance to connect, test their skills, and forge new friendships,” stated Evo and Sony Interactive Entertainment.

For more information, you can check out Sony’s official blogpost about Evo and the official Evo website.