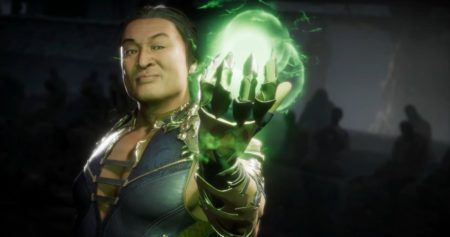 Shang Tsung is the latest addition to the MK11 roster, and has been out for less than a month, but he’s already causing quite a stir with many pros ranking him near the top of their tier lists.

But Mortal Kombat’s OG boss is also one of the trickier characters to master, with his relatively slow attacks, complicated fireball game, and signature shapeshifting abilities.

We reached out to Syed “CaptainFluffles” Farhan, who recently won Thaiger Uppercut with Shang Tsung to provide some pro-level insight into how to play the character.

Before we start, if you’re new to Mortal Kombat, here’s how to read the standard combo notation for the game:

Shang Tsung is an excellent zoning character, especially with his Warlock variation.

His standard Fire Skull (BF1) projectile comes out fast and can be amplified twice.

The double amplify is a Krushing Blow that hits for 23% damage if only the last projectile hits. This is especially effective if you’re facing an opponent that ducks the first two projectiles and doesn’t know that the last skull hits mid.

Shang Tsung’s Ground Eruption (DB1) is probably his best special move. You can use it to zone, but it also works as a combo starter and anti-air.

Finally, Shang Tsung’s Corpse Drop (DF3) is an often forgotten but useful zoning tool. It’s an overhead that can be amplified to also hit low and knockdown.

It’s great against characters like Cassie that have a low projectile that ducks under Shang’s regular fireball. If she throws out a full screen low, instead of getting into a fireball war, you can just throw out the corpse drop and amplify for a knockdown.

Shang Tsung has a number of attack strings that result in advantage on block.

Dark Arts (1,1,2) gives +6 on block, but puts you quite far from the opponent. You can follow up with Ground Eruption to effectively jail the opponent. The only thing he can do is block. If he back dashes, jumps, or attacks he’ll get hit.

Burning Evil (F2,4,2) is +4 on block and gives you more follow up options. You can poke low with D4, or follow up with Ground Eruption, or even a jump in attack string.

Shang Tsung has a strong mixup game as a lot of the second attacks in his hitstrings hit either low or overhead.

You can start out by throwing out Shapeshifter (F2, 4), which hits mid then low, or Raising Hell (3, U2), which hits high then low.

If your opponent starts figuring this out, you can do Reserved Pain (B1, D2), which is an overhead.

Reserved Pain can also Krushing Blow if only the second hit connects, which you can follow up with a big combo.

After landing any of your openers, there are a few ways to end your combo. If you want to go for maximum damage or you want to continue your zoning game you can combo into amplified Ground Eruption, juggle with 4 then Ground Eruption again. This will put the opponent at full screen.

Alternatively, if you know how to play your opponent’s character, you can combo into amplified Ground Eruption, and juggle with Raising Hell (3, U2) into Soul Steal (BF2).

Shang Tsung has a lot of tricky setups, but he’s not unbeatable. Many of his best hitstrings can be countered with good timing.

Burning Evil can be interrupted between the second and third hits with any six frame poke.

Alternatively, you can Flawless Block the third hit.

The third hit of Dark Arts can also be Flawless Blocked.

Ground Eruption can also be countered by forward dashing between the first and second eruption. This needs perfect timing though, or you’ll eat a big combo.