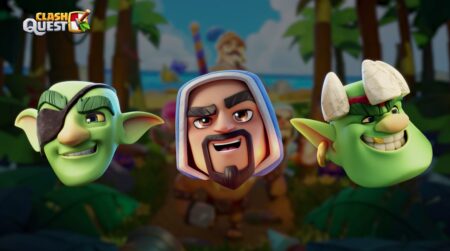 Known for its fast-paced combat and strategy-based mobile games, the new Clash games Clash Quest, Clash Mini, and Clash Heroes will expand on the Clash universe with new game genres. All three use the same characters and graphics while introducing a new art style and format for all Clash players.

Here’s everything we know so far.

Clash Quest is a tactical game set on a small, 4×4 board. It lets players explore the Archipelago map to gain more units and form stronger armies. Clash Quest is introducing a new element for the first time — bosses. Three bosses have been revealed so far — the Lava Golem, Goblin King, and the Papa Dragon. You can also equip items for your units which adds to the depth and complexity of the game.

As for the art style, Clash Quest characters now have a more simplified look compared to their Clash of Clan and Clash Royale counterparts.

Clash Quest is currently being developed by Supercell Helsinki.

If you’re into auto chess titles like Drodo Studios’ Auto Chess, Valve’s Dota Underlords, and Riot Games’ Teamfight Tactics, you will love Clash Mini. In this game, players use miniature versions of the characters to fight in a chessboard-like environment. It’s basically a board game inside the Clash universe!

All Clash characters have been transformed into these mini board pieces, complete with their own stand bases.

“Imagine your favorite characters from Clash sitting down at the Mini table and dueling with the miniature versions of those around them,” explained Community Manager Vladislav Perge.

Perhaps the most exciting out of these three titles is Clash Heroes, which combines RPG and combat elements. It plays in a landscape format just like Clash of Clans and shows a more refined and detailed art style when it comes to its characters and environmental design.

The development team plans to add some twists to existing characters and at the same time release new ones.

Both Clash Mini and Clash Heroes are still in early development under the Supercell Shanghai team.

Supercell has not yet announced a release date for these three games but players can sign up here to be notified of updates and more developments.