Use the Force, you will. 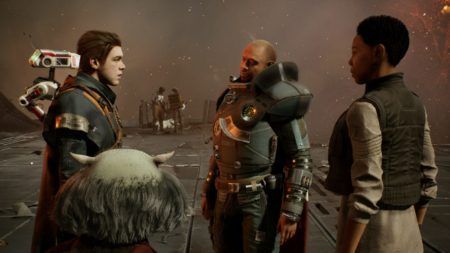 The Force is strong with Respawn’s upcoming Star Wars game.

Star Wars Jedi: Fallen Order is a third-person action game that lets you take on the role of Padawan Cal Kestis as he tries to survive the fallout of Order 66, and from what we’ve seen so far, it’s going to be pretty epic.

EA showed off a gameplay demo at its EA Play 2019 event, and has Cal starting from the jungles of Wookie planet Kashyyyk with his trusty droid BD-1 perched on his back. You’ll be able to battle against Stormtroopers and go hand-to-hand with Purge Troopers as well.

Cal will be able to do plenty of Jedi tricks besides swinging his lightsaber around. He’ll be able to use a move similar to Kylo Ren’s ability to stop blaster bolts in mid air, use Force Pull to grab enemies from afar, or even throw his lightsaber to slice down enemies at range. Cal can also wall run as well — a move that looks very similar to the old Jedi Academy games.

The style feels similar to the God of War and Uncharted games, and developer Respawn has even thrown in some Sekiro style elements with a posture-like system. Basically, you have to deplete an enemy’s ability to parry (or block) before you’re able to hit them. It also applies to Cal, so that means you have to be careful when parrying attacks as well.

Star Wars Jedi: Fallen Order is set to be released on November 15 this year on Windows, PlayStation 4, and Xbox One. Check out the gameplay trailer below.

READ ALSO: The newest Apex Legend shows up in an electrifying teaser