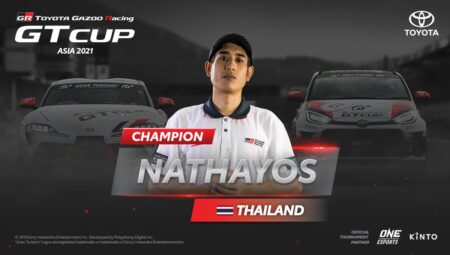 Nathayos Sirigaya has won the Toyota Gazoo Racing GT Cup Asia 2021 in convincing fashion, taking two wins and a third-place on his way to the title.

His ability to keep cool and put in consistent performances throughout the day let him fight off his rivals on his way to the title, earning him a spot in the Global Finals of the TGR GT Cup 2021 in November.

Taiwan’s Y.T. Chou also put in an excellent performance, winning the final race to take second overall, and also securing his spot in the global finals.

Defending champion Aleef had an uncharacteristically quiet day, but still managed to get himself onto the overall podium in third place.

The team championship was also won by Thailand, thanks to Nathayos and strong individual efforts from his teammates, Wasin and Thanaphat.

The format for this year’s tournament differed a little from last year’s event, with 21 racers from 7 different teams going for both individual glory as well as a team championship.

The field was split into two initial Semi Final races, Group A and B, with five from each qualifying for the Finals, as well as a Consolation race that would serve as the last chance qualification into the Finals for the remaining racers.

The first Semi Final took place on Tokyo Expressway, a track where the slipstream and clever car positioning can make a significant difference as opposed to outright car speed. The racers were in the new Toyota GR Yaris.

Immediately in the qualifying session, the Thai pair of Nathayos and Thanaphat illustrated a good understanding of both of the aforementioned tactics as they paired together to bump each other along. This tactic worked perfectly as they went straight to first and second.

This provided the pair with a strong position for lap 1 of the race, albeit a dangerous one. Thanks to the very long straight before the tight first corner, things can quickly go wrong on this course. As the Thai pair approached turn 1, third-placed Iqbal braked slightly too late, but luckily narrowly missed the first two cars. While disaster was averted, Iqbal’s error ended up widening the gap between the Thai pair and the rest of the field.

This would prove crucial, as the two Thai drivers once again demonstrated excellent teamwork and pushed each other clear of the field. Meanwhile, the battle for third raged between Iqbal and Aleef, although both played it relatively safe so as to not risk their qualification spot in the Finals.

Behind them, India’s Raghav received a penalty that threatened his key fifth position, but ultimately he was able to hold on. Meanwhile, at the front, Nathayos and Thanaphat stayed in tandem until the very end of the race, leading to a spectacular run to the finish, ultimately decided in the favor of Nathayos.

The action then shifted to the second group, who would compete Semi Final Group B on the same track and in the same car. Interestingly many of the racers chose to do their own thing in the qualifying session, and it seemed to work until the trio of Y.T. Chou, Wasin and S.H. Lin put in a last-minute effort to lock in the top three spots on the grid.

Once again, the racers were careful and professional at turn one and all got through safely, but a penalty for India’s Abishek split the field, once again enabling first and second-place Y.T. Chou and Wasin, to scarper away into the lead and to safety.

Meanwhile, Taj Aiman started to make ground through the field and got himself to third, leading the second pack.

Otherwise, besides some carnage towards the back, the race was relatively straightforward, with the first five playing it safe to ensure qualification.

Once again, however, the finish came down to a mad sprint to the line, this time with Y.T. Chou and Wasin putting on an almost carbon copy of the first race!

Those that didn’t qualify now had their chance at redemption, this time on Fuji Speedway, in the Toyota GR Supra. Where teamwork was key in the previous race, this one was more of a traditional race.

Pole went to A.R. Maulana, with Ethan and N. Junggil in second and third. Fuji also has a dangerous first corner, so surviving it is key to success.

A.R. Maulana and Ethan made it through, but behind them, a bit of contact bunched the pack up, which led to a great battle from third, all the way back to eighth, as all five racers jostled for the coveted final qualification spots in the final.

While the front two did a disappearing act, the battle for fourth, fifth, and sixth was where the action was.

P. JunHyeong, N. Junggil, and Nabil were all engaged in a spectacular battle over the last two laps, with all the racers knowing that only two of them could qualify.

Ultimately it came down to the final corner, where it was the unfortunate Nabil who was the racer knocked out of the competition.

Now the field was set for the final two races, the first of which was to be held at the iconic Spa Francorchamps circuit, this time in the new Toyota GR 86 car.

Nathayos continued his fine form in qualifying, grabbing pole position, from M. Pratama, and Y.T. Chou. Despite the lap being over two minutes long, the field was incredibly close, with the first seven cars separated by just 0.4 of a second!

This race required plenty of strategy, with one mandatory pitstop and two tire choices available to the drivers. The differing strategies became apparent immediately with the first four on the medium tire, and the remaining drivers choosing to use the hard compound.

At the end of the first lap, Aiman pitted in along with many others to immediately put on the faster compound of tires. Interestingly, defending champion Aleef stayed out for another lap, costing him time initially, but with the hope that better tires would pay dividends towards the end of the race.

At the front, Nathayos was once again putting on a masterclass. Driving his own race, he began to build a gap ahead of the rest of the field. Behind him, second through fourth followed in a train, doing their best to not cost themselves time.

Aleef pitted in at the end of lap two and lost position to both Aiman and Raghav who had pitted previously. Aleef was able to catch Aiman, but could not find a way past Raghav. This would prove costly to his strategy.

At the front, the battle heated up for second position. While they were all battling, the ever-present threat of the early stoppers was increasing, and when they pitted to do their mandatory pitstop at the end of lap 5, they rejoined right with the hard-charging Aiman and set up a fantastic battle through Eau Rouge.

This would ultimately be decided right at the end of the lap, with a battle into the final chicane.

Nathayos took a comfortable victory out front, followed by Moreno who did well to hold off Aiman in third, and Thanaphat in fourth place.

This put Nathayos in prime position to win the title in Round 2 of the Final Race, held at the revered Circuit de la Sarthe.

The car of choice this time would be the Toyota TS050 hybrid race car, a stark contrast to the tuned road cars used previously.

The philosophy for the qualifying and race was fundamentally different — precision was required to avoid extremely costly penalties, and management of the car’s hybrid power system is crucial to overall speed.

With one mistake devastating to the drivers, many took a conservative approach to qualifying, but Y.T. Chou absolutely blitzed them to take pole position with Aleef in second. Nathayos took fifth position, which put a bit of pressure on the championship leader.

With the high-speed nature of the cars, there wasn’t going to be much wheel to wheel action in this race, and it turned out to be more of a careful strategic drive for many of the racers. Interestingly, Nathayos chose the soft tires for the first stint, while the two cars ahead of him on the grid, Iqbal and Thanaphat, chose mediums. This paid off, however, as he was able to clear them and chase after race leaders Y.T. Chou and Aleef at the start.

A hard-charging Moreno nearly caused carnage on lap two when he made contact with the back of Iqbal, who did a miraculous job in not crashing. This would cost them time however in their race against the leaders.

On lap three, leader Y.T. Chou looked to have made a crucial error and incurred a shortcut penalty, which would’ve enabled Aleef to catch up. However, Aleef himself then got one, letting Y.T. Chou off the hook!

Besides that hiccup, it was a comfortable victory for Y.T. Chou in an impressive drive, followed home by Aleef in second, and third place for Nathayos, which was good enough to clinch his title victory.

The final standings of the competition had Nathayos win with Y.T. Chou finishing second overall, letting both advance to the Global Finals of the TGR GT Cup 2021 in November. Defending champion, Aleef, narrowly missed out, taking third place overall.

In the teams championship, the teamwork demonstrated by the Thai drivers, coupled with strong individual results, gave them a comfortable win, followed by Malaysia and Taiwan.

Speaking to Nathayos after the Final race, the champion said, “Entering the final race with the points lead, I knew I did not have to do any risky moves to fight for the championship. All I had to do was nurse it home in a position I could score enough points, and luckily it came out just that.”

“Winning was a delightful moment,” Nathayos continued. “Especially after last year’s unfortunate result, the pressure was totally on me, so winning today was like lifting a mountain off my shoulders!”

Nathayos also shared that his favorite moment in the competition was winning Semi Final A with his Thai teammate, due to “the domination of the Thai team with Thanaphat Pungphat”.

As for the Global Finals in November, Nathayos said, “I’m looking forward to representing Asia and doing my best!! Getting to race on the world stage has always been one of my life’s goals and now I have that chance thanks to Toyota and all the supporters that supported me, ขอบคุณครับ (thank you).”