Female CS:GO pro, Mich, tells us how she deals with online toxicity and what makes her so good at entry fragging. 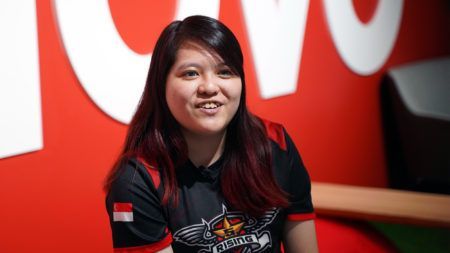 This is part of “Esports Heroes“, a series that takes a closer look at the stories and origins of some of our favorite esports pros.

Their squad, Rising5, won the Legion of Valkyries CS:GO Singapore Finals last weekend, with Mich playing a pivotal role as the team’s Entry Fragger in their grand finals victory over 1Percent.

Surprisingly, Mich only started playing video games a mere three years ago, when she was just 20.

“I started playing video games to have a common interest and better communication with my ex-boyfriend,” Mich told ONE Esports.

Watching her play, you might think CS:GO came easily to Mich, but she worked incredibly hard to get to the level she’s at now, racking up nearly 5,000 hours playing CS:GO over the past three years.

“I was a total noob at the start,” she said, “My friend called me brainless, and it took me a really long time to get to the level I’m at now. Back then I was schooling, and I skipped a lot of classes just to play CS. In fact, I had to extend a year of Poly because I skipped too many classes.”

Mich also had to deal with toxicity from other gamers due to her gender on a daily basis.

“It’s super toxic. People make comments like, “Go back to the kitchen” or they tell me to uninstall the game or scold my parents,” said Mich.

But she silenced her critics with her gameplay.

“I just mute them and continue playing. Then once my score is better I tell them girls can be good too.”

As the Entry Fragger for Rising5, Mich has arguably the most important role on her team. She’s relied upon to be the first woman in and get the first kill for her team.

What makes her so good at her role?

“I’m very ballsy,” said Mich. “I’m not afraid to enter any bombsite just to get info for the team. If I can get a kill, it’s a bonus, if I can’t, I’ll give my team information and let them know how to set up and win the round.”

With their win in the Singapore finals, Mich and the rest of Rising5 will now face female teams from Malaysia, Thailand, Vietnam, Indonesia, and the Philippines in the Legion of Valkyries regional playoffs.

From there, the winner of the regionals will head to the Grand Finals in Bangkok, taking place from Dec 13-15, to play against the winners from the other three regions.