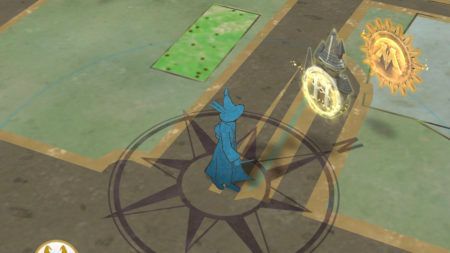 Catching cute little monsters may be lots of fun, but it doesn’t beat blasting evil wizards by casting spells with your finger.

The new augmented reality Harry Potter game may share a lot of the tech from Pokémon Go, such as the same map view, but it has plenty of its own charm.

Instead of tossing Pokéballs as a trainer, you’re a wizard brandishing your wand, casting spells at evil forces to save the world as you wander through the real world. You can take pit stops at Greenhouses (Pokéstops), battle dungeons at Fortresses (Gyms), and eat a meal at an Inn to replenish your energy. There are also flags on the map to denote areas of interest that you should definitely go check out.

Energy doesn’t appear to refill over time, so you’ll need to head to an Inn to get more energy to keep playing, or spend coins to do so.

The premise of the game is to collect items guarded by magical creatures or dark magic, the more you collect, the more loot you get. As you get deeper into the game, you unlock professions that you can switch any time, but you don’t carry over the skills that you’ve invested in. So it’s best to pick one and stick with it.

When you feel strong enough, you can head to Fortresses to battle dark creatures, and unlike Pokémon Go, there are no rival battles to worry about. Instead, it’s all about team work as you partner up with other players to dive into the dungeon.

Fighting creatures is quite different from casting spells. You’ll have to attack and defend, and if you run of hit points, the battle is over. The good news is you can drink potions to refill your health.

The coolest thing so far about Wizards Unite though isn’t casting spells or the Harry Potter lore — it’s actually unlocking Portkeys. Similar to Pokémon eggs, you’ll need to walk quite a bit to unlock them, but when you do, the special augmented reality experience kicks in when you open them.

You’ll have to scan around with your phone, and once you find the magic spot, you place the Portkey down (in this case, a shoe), and a portal opens up that you can step into. You can then explore this new place to collect stuff.

It’s pretty magical the first time you do so, although I’m guessing the allure will fade over time.

Harry Potter: Wizards Unite is a totally different game from Pokémon Go when it first launched, and that’s a good thing. There’s plenty to do, dungeons to explore, things to collect and you can even customize your wand. If there’s one thing it lacks though, it’s that you can’t play as a different faction, unlike Niantic’s Ingress. I, for one, would love to be a dark wizard doing my best to stop all you goody two-shoes from saving the world.