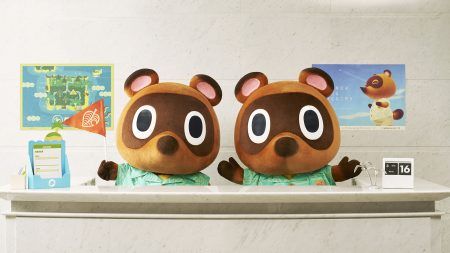 Ninji found that the three house levels (after the tent) contain an art section. What kind of pieces will we be able to put up inside our cribs?

He also discovered that there’s an entry for two extra museum upgrades. Aside from the museum, two standalone buildings were mentioned, specifically, a museum shop and a museum cafe, which contains a Gyroid section.

This could mean that everyone’s favorite barista pigeon Brewster might be coming to town soon!

Another non-player character that could appear in New Horizons is the fox Redd.

Ninji located a ship that will dock on the ‘secret beach’ at the northern part of your island, with the Japanese characters つねきち as the acre’s name.

This translates to “tsunekichi,” which is Redd’s Japanese name. We are theorizing that Nintendo might bring back his counterfeit paintings and over-priced items in the game. Additionally, Ninji thinks players will be able to give Redd some items because of a specific code he found.

A variety of new vegetation might also sprout on your island soon. Bushes, which appeared in past titles like New Leaf, have a big chance to bloom and officially be a part of the game.

The list of vegetation includes azaleas, hibiscus, holly, hydrangeas, camellias, and osmanthus, although the list might still change according to Ninji. Vegetables that can be grown and picked are tomatoes, wheat, sugar cane, potatoes, carrots, and pumpkins.

It looks like more marine creatures will also be added to the game, as Ninji discovered a file for a “Seafood” Critterpedia page. The file was supposed to have 33 items, but only one currently exists in the game which is the manila clam.

The possibility of diving in the game’s clear waters has also been opened up by Ninji.

He says actually swimming underwater will allow players to obtain a different set of creatures apart from the one you normally catch during fishing. “There’s a portion of the save file reserved to store them already!”

He also had other findings, which can be read in this full Twitter thread.