This is the EC2 you’ve been waiting for. 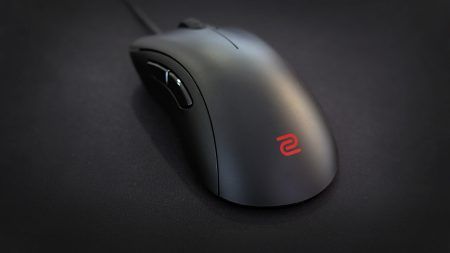 BenQ Zowie’s EC line of mice has been a favorite among FPS pros for years now, and despite a recent surge of competitors armed with super lightweight honeycomb shells, lag-free wireless connections, optical switches, and other next-gen features, the EC series remains as popular as ever.

The EC1 and EC2 are the latest iterations of the lineup, and offer a number of changes over their predecessors, the EC1-B and EC2-B. With BenQ dropping the letter part of the name completely, the company seems to be sending a signal that these are the ultimate versions of these mice, and no further updates will be needed.

For the most part, that’s true.

If you’re unfamiliar with the EC series, all you need to know is that many people think it has the best ergonomic shape of all time. There’s a reason why it’s one of the most copied shapes out there and even if you don’t think it’s the GOAT, it’s probably in your top three, somewhere alongside the Razer Deathadder and Microsoft Intellimouse 3.0.

The right-handed ergonomic shape is pretty safe, without any extreme contours or curvature to force your hand into a certain grip. If you use a palm or claw grip, the mouse will feel very natural, and it remains one of the most comfortable shapes on the market today.

Like the rest of Zowie’s lineup, the only differences between the EC1 and EC2 are the size and weight. The EC1 is larger and comparable in size to a Razer Deathadder or Glorious Model D, while the EC2 is smaller and more similar to a G-Wolves Skoll or the upcoming Glorious Model D-.

Both mice are actually fairly heavy by modern ultralight standards, weighing in at 97g for the EC1 and 90g for the EC2, but ultralight mice aren’t for everyone (myself included), and the sub-100g weight is still very good for an FPS-centric mouse.

If you’re not sure which size to get, the EC2 is generally the better choice for most people. Its more compact size allows you to be ultra-precise with your movement and its lighter weight makes it a bit more nimble too.

As for what makes the EC different from its predecessors, you can essentially think of it as a mash-up of the EC-A and EC-B series, combining the best parts of each.

The coating is more similar to the EC-A with a semi-matte finish that feels a little slippery when your hands are dry, but gives great grip if your hands are even slightly sweaty. If your hands don’t sweat at all, you can achieve the same effect by wetting them with some water and then half-drying your hands.

The mouse feet are also straight from the EC-A, with two large feet at the front and rear. This results in a more controlled, but slower and less glidey feel than the EC-B’s four small feet.

Everything else on the mouse, from the switches and scroll wheel, to the sensor and cable is taken straight from the EC-B.

Like all Zowie mice, the EC series uses Huano switches, which deliver a crisp, firm click. It’s worth noting however that since the EC-B series, Zowie has been making the left and right mouse click less stiff, and that trend continues with the EC2. For hardcore fans of the EC-A series you might take a few days to adjust to the new switches.

The side buttons are well-sized and also crisp — a big improvement over the mushy side buttons the EC-A series was notorious for.

While this makes it great for B-Hopping and weapon switching (since you’ll never accidentally scroll too far) it makes it pretty terrible for web browsing. Obviously, with its focus on esports, web browsing performance isn’t much of a concern for BenQ, but I do think some kind of middle ground could be reached in future products.

The cable is Zowie’s standard flexible rubber cable. It hasn’t changed in years, and it remains one of the better stock cables out there. It’s lightweight, doesn’t kink, and it won’t drag on your table or mouse mat, although a bungie is still recommended.

With sensor technology pretty much reaching its zenith there’s not much to differentiate between top mice anymore. The EC uses the same Pixart 3360 sensor found in the EC-B, which is generally considered flawless and the best sensor on the market today.

I tested the EC2 in a variety of FPS games ranging from Destiny 2 to Overwatch and Valorant, and it performed perfectly in each one. My first day with the EC2 made me remember what makes this mouse so special, and even after nearly two years of using a variety of ambidextrous mice, returning to the EC2 made me feel right at home. In fact, I will probably be making it my main mouse for the foreseeable future.

Verdict: The EC series is basically the grandfather of ergonomic FPS gaming mice. It doesn’t have any of the bells and whistles of its younger, flashier competitors, but as fads come and go, you just know the EC series will endure.

The BenQ Zowie EC1 and EC2 are available now.