This isn’t a load of Mumbo Jumbo. The dynamic duo of Banjo the bear and Kazooie the breegull are making their way to Super Smash Bros. Ultimate as a DLC character.

A trailer shown at the Nintendo Direct conference at E3 parodied last year’s reveal of King K. Rool, but this time around, the royal crocodile joins the Kong family in their cottage.

Disturbed by a noise outside, the Kong family looks out the window to find a silhouette of what appears to be Banjo-Kazooie, only for it to be revealed to be the duo from Duck Hunt. Fortunately, our favorite bear and breegull soon drop out of the sky to stomp the imposters out of their spotlight.

After the reveal, the video showcased some of Banjo-Kazooie’s moves. 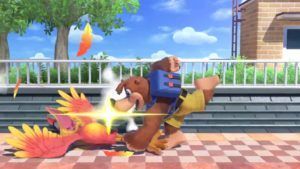 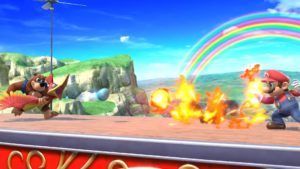 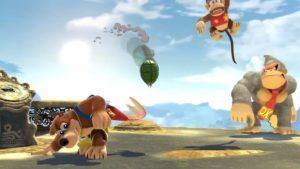 The pair’s up-special seems to be a launchpad similar to Sonic’s spring. In the air, Kazooie is able to flap her wings to gain altitude. It’s unsure if the launch pad turns into a projectile if performed airborne like Sonic’s.

Their side-smashes seem fairly typical, except for the fact that Banjo’s smashing tool is literally Kazooie. He also uses his bird friend as a makeshift egg-shooter in what appears to be their neutral and side-special.

Their down-special has Kazooie chucking a grenade behind her similar to Diddy Kong’s banana peel, although hopefully with a bigger bang.

Nintendo may also have revealed a home stage for the pair, with this clip that shows the lair of their nemesis Gruntilda Winkybunion.

Banjo-Kazooie have been out of the limelight for a while, but the pair have a long history with Nintendo. Their first game, Banjo-Kazooie, on the Nintendo 64 was one of the best-selling games of 1998, and currently has a 92% score on Metacritic.

As of now, the last appearance by the duo was in 2008 in the Xbox 360 game Banjo-Kazooie: Nuts and Bolts.

A release date for Banjo-Kazooie has not been announced yet, but based on the releases of Piranha Plant and Joker, we should see the pair making their way to the battlefield around August or September.