Abel defends home turf with a dominating victory in Peru. 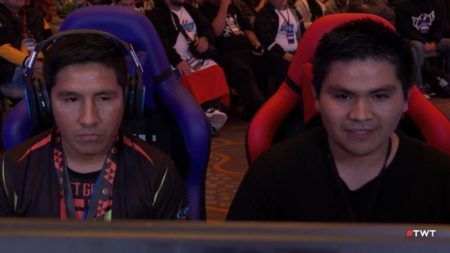 The grand finals was a rematch of the winners finals, which Abel easily won 3-0.

In the grand finals, Abel stuck to his main, Eddy, while Roynichi went with Geese after his Hwoarang got destroyed the first time the two faced off.

The character change worked out well for Roynichi. With Geese’s more technical juggles, Roynichi had no trouble in launching Abel during his mix-ups.

Abel started to take control during game two. With Infinite Azure as the selected stage, Roynichi had no chance of dealing extended meter burn combos. With this advantage, Abel brought out some tricky mix-ups to keep Roynichi guessing.

In the last round of Game two, Roynichi whiffed Geese’s Rage Drive, giving Abel a chance to finish him off with a fast combo.

Roynichi started to find hope in the third game. Although Abel had a two-round lead, Roynichi was able to slow the pace of the game and tie up the scoreboard. In the last round, Roynichi utilized the wall for some heavy damage combos, finishing off Abel with some quick pokes.

With Roynichi only a game away from a reset, Abel selected an infinite stage to keep Geese’s damage to a minimum. Without walls, Abel spaced himself well in times of pressure and rushed hard with mix-ups to take his second game.

Unsurprisingly, Roynichi selected another walled stage for game five and quickly began to dominate. Although Abel was able to get the first round, Roynichi retaliated with two perfect rounds.

Roynichi relied on wall splats to inflict extra combo damage to the Eddy player, even ending one of the rounds with a command grab.

On a roll, Roynichi easily dismantled Abel’s tech traps in the third round. With a manual mid parry, the Geese player executed a life-draining combo at the wall.

Abel tried to come back with a mix-up, but Roynichi launched him for another deadly combo. With only a sliver of life left, Roynichi rushed in with a quick low jab to get the reset.

Despite having all the momentum on his side, the second set didn’t go well for Roynichi.

Even with walled stages selected, it was obvious that Abel had Roynichi’s Geese figured out.

In the third and final game of the reset, while Roynichi played aggressively, he whiffed one of his lows in the last round, leaving him vulnerable for a big counterpoke from Abel that finished the game.

With his tournament win, Abel Del Maestro goes home with US$2,500 and 300 Tekken points, launching him up to number 12 on the Tekken World Tour leaderboard.

The next Tekken World Tour event will be the Challenger Event FV Cup in Malaysia, which will happen on August 24-25.