5 esports tournaments that ended in disaster

Whatever can go wrong, will go wrong. 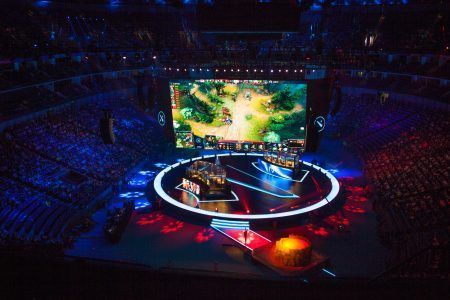 Murphy’s law states that “whatever can go wrong, will go wrong.” And when it comes to multimillion-dollar esports tournaments, Murphy strikes often.

Unlike traditional sports, esports tournaments are much more susceptible to technical issues that can affect the outcome of the game. Whether it’s poor internet, malfunctioning hardware, or a complete power outage, disaster has been known to strike on even the most prestigious stages.

Here’s a look back at five esports tournaments that didn’t go quite as planned.

On October 8, 2012, during the second game of the quarterfinals for the League of Legends Season 2 World Championships, Team World Elite and Counter Logic Gaming Europe’s intense match was cut short.

The internet connection at the Staples Center went offline, and game two had to be replayed from scratch since there was no other way for both teams to continue with the same game progress.

CLG EU eventually won game two which tied up the series 1-1. In the third and final game, CLG EU stalled as much as they could while increasing their lead. But, at the 59-minute mark of game three, the match was cut short yet again due to the same internet outage.

Riot Games then decided to restart the game with the exact same heroes picks and bans. Both the production staff and the live crowd were forced to endure another internet connection issue at the 25-minute mark of the remade third game that caused all the players to be disconnected.

In total, the players had been playing the same quarterfinals match for eight hours.

With the third remake about to go underway, Mitch “Krepo” Voorspoels’s PC went down, which caused another set of delays. This forced Riot Games to call it a day and end the event then and there. They then released a statement that included a rescheduled date for the final games of the Season 2 World Playoffs.

The ESWC (Electronic Sports World Cup) 2015 was a Counter-Strike: Global Offensive tournament that took place on July 10, 2015. It had some of the best teams from around the world, but the event was better remembered for its continuous short commercial breaks.

Due to heatwaves in Montreal, the event’s servers overheated and caused multiple delays. On the second day of competition, their servers were then DDOSed which prevented the tournament from progressing.

On July 19, 2015, during the Evo Grand Finals for Ultra Street Fighter IV, Yusuke “Momochi” Momochi and Bruce “Gamerbee” Hsiang were locked in an intense final set with the match tied 2-2.

With Momochi on tournament point and landing the first few hits of the round, his arcade stick suddenly disconnected mid-match. This forced him to concede the round and forced the entire tournament to come down to the very last round.

However, Momochi was unable to find a replacement Razer arcade stick to use. Instead, he was forced to borrow a different arcade stick from Tokido. In the end, it wouldn’t make a difference, as Momochi won the round to secure his EVO 2015 win.

The Shanghai Major took place on February 25, 2016, and was poised to be one of the most exciting esports events in Dota 2, but it turned out to be a complete nightmare.

Right from the start of the event, there were multiple technical difficulties and significant delays that set the tone for the entire tournament. One of the most notable issues from the event was the continuous audio issues that happened live on the official stream of the event.

The main host of the Shanghai Major, James “2GD” Harding, was fired after the first day of the group stage due to inappropriate comments that he used in his hosting material.

Eventually, the production company, KeyTV, was also fired on the morning of the third day due to the ongoing issues.

Most of the event talent’s were forced to improvise and fix the various issues that plagued the event.

Even some of the player’s items and equipment were lost by the Shanghai Major staff as well and this produced its own set of delays.

In the SEA Closed Qualifiers for the LA Major, Team Adroit made it through the Group Stage and were set to face Fnatic in a best-of-three match with the winning team advancing to the Major.

However, due to unexpected internet issues that occurred in Team Adroit’s bootcamp facility, the team was forced to forfeit the first game.

They then scrambled and rushed to a nearby internet cafe to play game two, but still encountered connection issues, with Jun “Bok” Kanehara repeatedly disconnecting from the game.

Adroit tried to continue with the game but after yet another disconnect at the 17-minute mark, the team decided to throw in the towel.

The second team to run into internet problems during the Los Angeles Major closed qualifier was Lowkey Esports.

In a tiebreaker match against Cignal Ultra, Lowkey Esports were ahead by 10,000 gold when they all suddenly disconnected from the game. According to the casters, the admin allowed Cignal Ultra to unpause because Lowkey Esports couldn’t rejoin the game.

With no opposition in their way, Cignal Ultra then pushed straight towards the Dire base and ended the match, eliminating Lowkey.

READ MORE: Fnatic and Adroit just played the most bizarre match of Dota we’ve ever seen