Let there be carnage with your Booyah. This time around, Garena announced that its next big partnership is a Venom crossover. This will be the game’s first-ever movie collaboration, which will go live at the same time as the film’s US theater release. 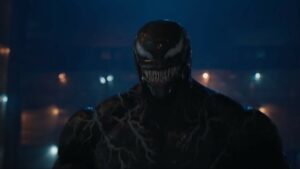 Players can look forward to a plethora of exclusive content from the Venom: Let There Be Carnage movie, including themed experiences, in-game missions, and collectibles.

As for cosmetics, Garena has hinted that there will be Venom crossover bundles that morph your character into the black alien symbiote. We might also see the movie’s antagonist, Carnage, get his own version of various items.

Data miner Bart FF found a few hints on what items are set for release in the game’s files:

Will Free Fire appear in the upcoming movie?

With Venom and Carnage clawing their way into Free Fire, it looks like the battle royale is also debuting on the silver screen.

According to Garena, there will be “a real treat” during the movie’s runtime that only true FF fans will spot. Will we see Venom and Carnage team up to get the Booyah? We can only hope.