Over 27.7 million players logged in to watch the concert. 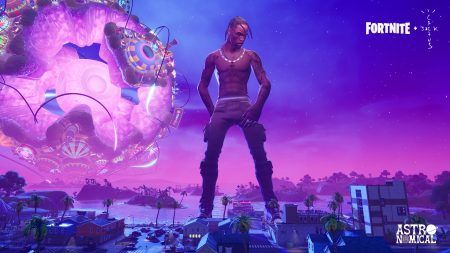 Rapper Travis Scott and Epic Games have just pulled off the biggest in-game concert ever.

According to a post by Epic, the Astronomical event had over 27.7 million unique players in-game participating live 45.8 million times across all five events.

The Astronomical event shattered Epic’s first in-game concert with Marshmellow back in 2019, which generated a total of 10 million viewers.

One of the biggest reasons why Fortnite is still able to draw in so many popular artists and properties is because of the game’s massive audience, along with the fact that all these talented artists are big fans of the popular Battle Royale game.

For example, Travis Scott has always been a big Fortnite fan and has played with Tyler “Ninja” Blevins in the past.

Marvel Studios directors Joe and Anthony Russo are both Fortnite fans as well, which is why Fortnite was featured in the Avengers Infinity War blockbuster. And, Fortnite had their own Avengers collaboration that promoted the movie.

World-famous rapper Drake has also been known to play Fortnite while working on his new album in the studio.