This will be the last major update before the arrival of Season 3. 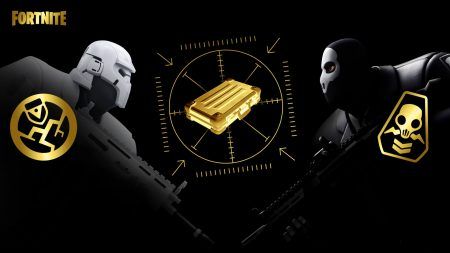 The v12.60 update for Fortnite: Battle Royale has arrived, bringing with it a new Spy Games mode, called Operation: Infiltration, and the promise of a future update to address controller aim assist for PC players.

The Operation: Infiltration limited-time mode pits two teams of eight players against one another in a scramble for “highly-confidential Intel Cases.” The mode plays into the ongoing storyline of the current season, which saw the Fortnite island overrun by a conflict between two warring secret agencies.

In each round of the mode, one team will have to extract valuable Intel Cases from their opponents’ side of the map while the other is tasked to protect said intel. The teams will swap sides after each round, with victory going to the winners of three rounds out of four.

Completing a round of Operation: Infiltration will secure Intel for each team that they can use to unlock special upgrades called Tech, which unlocks new weapons and abilities. Tech can be unlocked in any of the active Spy Game modes and can be used across all of them.

Fortnite developer, Epic Games, also pledged to release an update that will bring much-awaited fixes to aim assist on PC. Epic said that they won’t release the update until after the Fortnite Champion Series (FNCS) finals, meaning we can expect the fixes to arrive next week.

A significant portion of the Fortnite community, including the likes of Tyler “Ninja” Blevins and Turner “Tfue” Tenney, recently called for nerfs to aim assist for console players. This comes after the FNCS International Week 2 event was dominated by controller players in the North American East server.

The v12.60 update also adds a new set of weekly challenges called “Storm the Agency,” which may very well hint at what is to come for Season 3. It is worth noting that the v12.60 update is expected to be the last one before the next season’s delayed arrival in June.