He joins the likes of Taylor Swift, football star Mohamed Salah, U.S. president Donald Trump, and Pope Francis, among others. 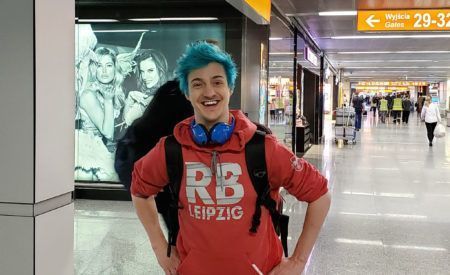 It seems you can Twitch stream your way to being as influential as Taylor Swift.

Fortnite: Battle Royale streamer and icon Tyler “Ninja” Blevins has been included in Time Magazine’s list of the 100 ‘Most Influential People’ of 2019, which also includes the likes of popstar Taylor Swift, football star Mohamed Salah, US president Donald Trump, and Pope Francis, among others.

Ninja was listed among the “pioneers” in Time’s list, which also counted the likes of actress Sandra Oh and rising tennis star Naomi Osaka among its members.

While Ninja’s massive online presence would have most people refer to him as an “influencer” instead, the 27-year old streamer earned his place among the world’s pioneers for his crucial role in making Fortnite the global phenomenon that it is today.

Ninja began his career in gaming by playing Halo 3 professionally in 2009 before becoming a streamer in 2011 — playing early battle royale titles such as H1ZI and PlayerUnknown’s Battlegrounds to a modest audience on Twitch. It wasn’t until 2017 when he started streaming Fortnite — which notably coincided with the game’s rise in popularity.

In March 2018, Ninja made headlines when he broke the Twitch record for viewers in a single individual stream when he hosted a star-studded game of Fortnite with rappers Drake and Travis Scott, as well as NFL player Juju Smith-Schuster.

He would break his own record a month later during his Ninja Vegas 2018 event, where he accumulated an audience of about 667,000 live viewers. Since then, Ninja has appeared on Ellen and Jimmy Fallon, was chosen as a cover athlete for ESPN Magazine, hosted his own New Year’s Eve from Times Square, and even got paid $1 million to host other games on his stream.

As Ninja became a household name both inside and outside of the gaming community, so too did Fortnite’s influence move into the mainstream. Smith-Schuster succinctly described how Ninja impacted gaming in his profile for Ninja in Time’s list:

“I play in the NFL, so you’d think I wouldn’t be star-struck much. But last March, when I — along with Drake and Travis Scott — got in a Fortnite game with Ninja for the first time, I was at a complete loss for words!”

“I was among the millions of people all across the world who had been watching Ninja play Fortnite, the popular video game, every day for months. He was the unquestioned best in the world at his craft, something I had so much respect for both as an athlete and as a fan. Now, he was single-handedly blending gaming and pop culture,” said the Pittsburgh Steelers wide receiver.

“I’ve been a huge video-game fanatic my whole life. But people have seen it as childish and a waste of time. Ninja was huge in building up the credibility of esports. At the end of the day, Ninja is an absolute legend, and someone to whom we owe a lot for making gaming what it is today.”

While gaming has had its fair share of celebrities, you would be hard-pressed to name anyone else that has been able to become as popular and influential as Ninja has been, which makes him the perfect choice for a spot on the Time’s list.