RNG are looking like the favorites to win the Minor after prevailing over Nigma in an intense back-and-forth series. 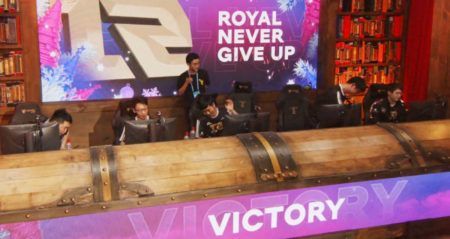 Chinese team Royal Never Give Up (RNG) emerged victorious, 2-1, over Nigma Esports in a thriller of a series to advance to the Upper Bracket Finals of the WePlay! Bukovel Minor against Geek Fam.

Nigma looked to take it late in game one as Amer “Miracle-” Al-Barkawi was put on Naga Siren, with Aliwi “w33” Omar on a mid Tiny and Ivan “MinD_ControL” Ivanov on an offlane Enigma to see him through the midgame.

RNG looked to end things quickly however, as they ran a tri-core of Slark for Du “Monet” Peng, Puck for Gao “Setsu” Zhenxiong, and an offlane Vengeful Spirit for Su “Flywin” Lei.

Things went as expected in the early game considering Nigma’s late game-oriented strategy, as RNG held a 10-1 kill lead after 13 minutes and were looking to snowball heavily in the midgame. While Nigma were looking to get active on the map, Setsu played a key role in shutting down their maneuvers and giving the Chinese squad a firm grasp on the game.

Nigma repeatedly tried to throw bodies at RNG to draw the game out and make space for Miracle- to be farmed enough, hoping he’d give them more of a fighting chance. However, RNG’s lineup was far too strong at that point for Miracle- to take on by himself and Nigma was eventually forced to call GG after 40 minutes.

The teams switched strategies in the second game of the series.

RNG looked to close out the series late as Monet was given Phantom Lancer, with Setsu on a mid Lina and Flyby on Vengeful Spirit again to back him up. Meanwhile Nigma wanted to tie things up in the midgame with Miracle- on Slark and w33 on Huskar.

Despite their late game-oriented lineup, RNG won the laning phase to come out with a ~2,000 gold advantage after 10 minutes. However, Nigma seized control of the game and never looked back after winning a big fight in mid lane at the 13-minute mark.

w33’s Huskar seemed nigh unkillable in fights even if RNG focused all of their damage on him, which enabled Miracle-‘s Slark to get into their backlines and mow them down.

Nigma’s relentless assault seemed too much for their Chinese opponents to bear, as they forced the GG call after just 22 minutes to tie the series up.

Nigma ran another fast-paced lineup in the decider with w33 on the Huskar once more, Miracle- on Templar Assassin, and MinD_ControL on an offlane Doom. In contrast, RNG looked to decide the series in the late game once more with a tri-core of Lifestealer for Monet, a mid Quas-Exort Invoker for Setsu, and Legion Commander for Flyby.

The laning phase ended with both teams on relatively even footing, but Miracle- had an excellent start that enabled him to take over the early fights for Nigma.

RNG prevented Nigma from pushing their advantage when they finally took down Miracle-, which delayed the game long enough for Setsu to build an Aghanim’s Scepter and get Cataclysm. Setsu used it to great effect when they caught out Miracle- as Nigma pushed up to their base, which let RNG claim their opponents’ bottom rax.

The momentum swung back in Nigma’s favor when they were able to kill Monet without buyback and secure Roshan, but they then threw that advantage away when they dived into RNG’s tier 4 towers and were repelled.

By that point, Nigma’s lineup had already lost much of its effectiveness just as RNG peaked in power. The Chinese squad were too much for their opponents to handle as they secured the 2-1 series victory after a thrilling 51 minutes.

With their win, RNG secure a Top 3 finish at the Minor and guarantee themselves at least US$54,000 and 110 Dota Pro Circuit points. They will be facing Geek Fam in the Upper Bracket Finals that will determine which team gets the first seat at the Grand Finals.

Meanwhile, Nigma drop down to the Lower Bracket where they will be fighting for their tournament lives against Gambit Esports.