There’s a reason the hero’s face is tattooed on Nikobaby’s neck. 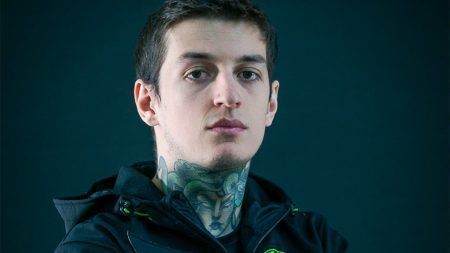 Despite dropping out of the ESL One Los Angeles Major qualifiers early, Alliance still had a shot at taking the long way there through the StarLadder Minor’s European Qualifiers.

Down 1-2 in the series, Alliance returned to form in game 4 and forced the series to a deciding game, where they relied on Nikobaby’s Medusa to carry them to victory.

Despite a solid start for Nikobaby that saw him bag a Triple Kill just thirteen minutes in, Nigma’s core duo of Amer “Miracle-” Al-Barkawi on Lifestealer and Aliwi “w33” Omar on Void Spirit began taking over by the midgame.

Nigma looked like they had the series in the bag, as they were able to destroy their opponents’ top and bottom barracks. However, Alliance managed to hang on and allow Nikobaby to get his first Divine Rapier, which gave his team a much-needed fighting chance.

While the Alliance defense — anchored by Nikobaby’s Rapier-wielding Medusa — was formidable, Nigma still brute-forced their way to getting Mega Creeps by the 42-minute mark. They lost w33 in the process, however.

Alliance marched straight down the middle lane to take advantage of Nigma’s lack of firepower. With the threat of Nikobaby’s Medusa bulldozing through their base defenses — and a need to save w33’s buyback — in mind, Nigma tried to delay Alliance’s push by making a play on their opponents’ side of the map.

That maneuver ended in disaster for Nigma, as Miracle ended up dead for over a minute and a half without buyback. Sensing an opportunity, Nikobaby acquired a second Rapier and headed straight for Nigma’s Ancient.

Despite the absurd damage output from Nikobaby’s two Divine Rapiers, things still leaned in Nigma’s favor. They had a Repair Kit that could delay Alliance’s push long enough for either Miracle to respawn or for them to sneakily take down their opponents’ exposed Ancient.

Pressure seemed to have gotten the better of Nigma at that point, as they wasted two charges of the Repair Kit and failed to make a play for Alliance’s exposed Ancient. Nikobaby took full advantage of Nigma’s misplays and simply mowed through their lineup and then their Ancient, sealing the deal with an Ultra Kill to pad his stellar 14-3-11 KDA.

With their win, Alliance will be among the eight teams competing in the Kiev Minor in early March, where they will be vying for the lion’s share of the US$300,000 prize and 660 Dota Pro Circuit point pool, as well as the all-important final slot in the Los Angeles Major.