Only three players remain active among the five that delivered North America its only Aegis of Champions in TI5. 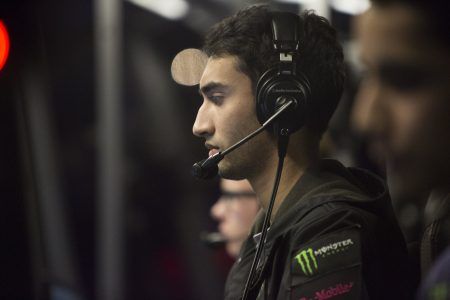 Saahil “Universe” Arora, The International 2015 (TI5) champion and one of the best offlaners in the history of the game, has announced his retirement from competitive Dota 2.

“I have decided to retire as a player from competitive dota 2. Whenever I do anything in life I tend to be an all or nothing type of person and Dota was no different. For the past 10 years I have given everything I have to this game/competition and it was an incredible experience,” Universe said in a statement on his personal Twitter account.

Universe has ended a decorated career as one of the best and most prolific offlaners in the history of the game. He is best known for his proficiency with heroes such as Dark Seer and Tidehunter, as well as Faceless Void and Earthshaker (when those two heroes were regularly played in the offlane position).

Universe currently holds the highest number of pro wins on Dark Seer with 126 — at least 34 more than any other player. He also has the highest win percentage in pro games for Faceless Void (among the top 1,000 player-hero combos) and Tidehunter (out of all players with over 30 games on the hero).

His Earthshaker is also the stuff of Dota 2 legend. At the TI5 Grand Finals, Universe pulled off what is arguably the most iconic play with the hero with the “Six Million Dollar Echo Slam,” which secured the championship for Evil Geniuses (EG) in game four.

Universe has been a part of the competitive Dota 2 scene since its inception, starting out as a substitute for the Online Kingdom squad that finished seventh in the very first International back in 2011.

He first joined his longtime team, EG, in 2012 as a Position 5 support player before taking a short break to focus on his studies.

Universe returned to the scene in 2013 as the offlaner for Dignitas, where he began asserting himself as one of the most proficient players in his position in the West, as well as help his team to a ninth place finish at TI3.

In 2014, Universe became part of the legendary North American S A D B O Y S stack along with ppd, Artour “Arteezy” Babaev, Clinton “Fear” Loomis, and Ludwig “zai” Wåhlberg that was picked up by EG. This team quickly became one of the best teams in the world, earning a third-place finish at TI4.

After Arteezy and zai left for Team Secret in 2015, EG added Kurtis “Aui_2000” Ling and a then-unknown prodigy in Sumail “SumaiL” Hassan as their replacements. Ignoring doubts that EG’s new lineup could live up to the success of their previous roster, Universe was instrumental in his team’s run to the championship in TI5 — where he showcased masterful play from the offlane position all throughout the tournament.

In 2016, Universe was part of one of the craziest roster shuffles in Dota 2’s history. Despite EG still being one of the best teams in the world at the time, Universe and Arteezy suddenly left for rivals Team Secret in March mere days before the season’s roster lock. After both EG and Secret bombed out of the Manila Major in June, Universe left Secret to rejoin EG. While those roster changes forced EG to go through the Open Qualifiers to be able to compete in TI6, the team still finished third in the event to secure three-straight Top 3 finishes in the International.

After the post-TI6 roster shuffle saw ppd step back from EG’s active roster to become the organization’s CEO and Fear leave for his first retirement, EG finished 9th-12th at TI7, which prompted Universe to also leave the team at the end of 2017.

Universe moved to Southeast Asia in 2018 to join Fnatic, though they only managed to finish at 13th-16th place in TI8. He later moved back to North America to join Quincy Crew, which later became Forward Gaming, before becoming inactive in March 2019.

Universe returned to the scene after TI9 to join forces with ppd in Ninjas in Pyjamas (NiP). However, NiP released Universe from its roster in April this year due to the effects of the coronavirus pandemic and the competitive scene’s move to regional competition in the upcoming 2020-2021 season.

“Now the time has come to pursue other interests and figure out what comes next. Thank you to my fans and past teammates for the amazing memories I will never forget,” said Universe.