Only one play could beat out Bryle’s huge Sonic Wave against Cloud9. 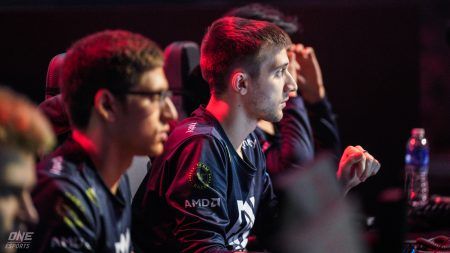 Here are the best plays from the North and South American teams in the tournament:

In the match between CR4ZY and Quincy Crew on the final day of the group stage, Jonathan “Bryle” De Guia’s Void Spirit was being hunted down by Quincy Crew, who were looking to gain a hefty bounty from ending his Godlike streak.

Just as Bryle was about to go down, Kurtis “Aui_2000” Ling on a support Pugna was able to heal his teammate with his Life Drain ultimate, which helped the Void Spirit survive long enough to cast his Dissimilate and Astral Step to escape Quincy Crew’s gank attempt.

4. Ryoya sets up a clutch two-man stomp for Arteezy

In the first game of a thrilling series between EG and Thunder Predator, EG’s stand-in midlaner Eric “Ryoya” Dong on Storm Spirit found himself facing off against two enemy core heroes during a chaotic teamfight.

After being hit by Dream Coil from Leonardo “Leostyle-” Sifuentes’ Puck, Ryoya skillfully kited his opponents while being careful enough to not break the coil to set up a clutch War Stomp from Artour “Arteezy” Babaev’s Doom and secure a teamwipe for EG.

In the second game of the Grand Final, Arteezy on Riki and Ryoya on Puck found themselves as the only two heroes alive after EG botched an initiation.

With the hero number advantage on Quincy Crew’s side, they decided to go for the EG team wipe. But Arteezy was able to dodge Quincy Crew’s area-of-effect spells and blink towards Ryoya’s Puck.

Quincy Crew looked like they were about to secure a huge team wipe, but Arteezy was able to dodge Quincy Crew’s area-of-effect spells and blink towards Ryoya’s Puck then used his hero’s invisibility and clever positioning to escape with just a sliver of health.

During a lower bracket matchup between CR4ZY and C9, Bryle on Queen of Pain landed a perfect Sonic Wave ultimate on four enemy heroes that won his team a huge clash and earned himself a Triple Kill.

EG’s match against Thunder Predator proved to be the most exciting match of the tournament. In the second game of the series, Andreas “Cr1t-” Nielsen on Elder Titan showed that even supports can carry their teams to victory in desperate situations.

At the 48-minute mark of the game, EG decided to go for Thunder Predator’s Ancient with Arteezy’s Divine Rapier pickup on his Gyrocopter. However, they were ousted from the enemy base after they failed to take down the Ancient because of Thunder Predator’s Repair Kit.

After their successful base defense, Thunder Predator decided to run straight into EG’s base in order to even the series. While the South American squad was able to kill all of the EG heroes who bought back except for Cr1t-, EG’s star support player was able to take down Alonso “Mnz” Leon’s Spectre and pick up Arteezy’s Divine Rapier. With the Rapier in hand, Cr1t- cleaned up the remaining Thunder Predator heroes to extend the game for EG.

While Thunder Predator eventually won that crazy game, Cr1t- still earned himself the best highlight of the tournament.