After struggling early in the tournament, EG now looks like one of the favorites again. 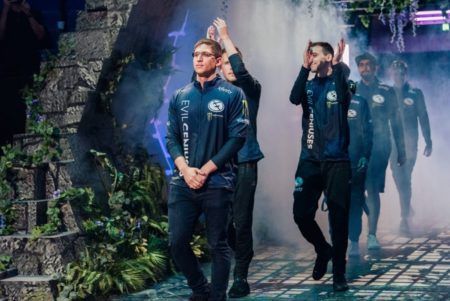 The hyped-up showdown between two of the Western powerhouses in Dota saw Evil Geniuses (EG) prevail over Team Secret in a 2-1 slugfest — including a game two thriller that is definitely the best game of the Main Event so far.

EG looked to go late with Sven for Artour “Arteezy” Babaev and Leshrac for Sumail “SumaiL” Hassan, while Secret didn’t plan on letting them get there with a heavy mid-game lineup of Tiny for Yeik “MidOne” Nai Zheng, Wraith King for Michał “Nisha” Jankowski, Enchantress for Ludwig “zai” Wahlberg, and Chen for Clement “Puppey” Ivanov.

EG did not let Secret get their game plan going, however, as they accrued an early lead by shutting down MidOne. With Tiny not having the impact he was supposed to, EG had the edge in teamfights even as Secret went on the offensive.

While Secret were able to claw back at their opponents, EG’s teamfight power was becoming too much for them to overcome. Multiple pick offs put Secret back at a disadvantage, which meant they were unable to stop EG from claiming Roshan and pulling further ahead.

EG would go on to win another fight to open up Secret’s base. While the latter was able to hold on a bit longer, a crucial pick off on Nisha without buyback gave EG the opportunity to make the game-winning push.

Game two saw Secret field a strong teamfight composition with Nisha on Faceless Void, MidOne on Invoker, zai on Enigma, and Yazied “YapzOr” Jaradat on Earthshaker. EG countered with some teamfight power of their own in a Tidehunter for Gustav “s4” Magnusson while running it back with the Sven-Leshrac core duo.

EG got off to a strong start, coming out swinging in the early-midgame with s4’s Tidehunter using Ravage effectively to get multiple picks and objectives. Secret ground it out against them, but as a consequence MidOne fell behind the other cores by virtue of playing a Quas-Wex Invoker.

EG later got the opportunity to break into Secret’s base with a pick off on Nisha, thus putting Secret at a huge deficit. Even with the Aegis in hand, EG hesitated to push their advantage as they were afraid of Secret’s overwhelming teamfight.

A tense standoff ensued, as both teams knew that one teamfight could decide the game. Secret would get an opening after catching EG off-guard and forcing them to use their buybacks, later exploiting that to execute a beautiful teamfight combo to annihilate EG and force a deciding game three.

Secret veered away from the teamfight-oriented lineups they had in the previous games, opting for a highly-mobile lineup with Weaver for Nisha and Slark for MidOne. EG wanted to decide it late, however, with Arteezy on Phantom Assassin and SumaiL on Ember Spirit, with Andreas “Cr1t-” Nielsen on Magnus empowering them.

Secret took full advantage of their more mobile lineup to pressure EG’s lanes and take an early lead. With Arteezy still needing time to farm before he can be effective in fights, EG pinned their hopes on SumaiL to lead them in repelling the Secret offensive and get favorable trades.

Arteezy came online just in time as Secret was already bearing down on their base, with multiple skirmishes between the two ending in an apparent stalemate.

EG later found an opening to take control of the game with multiple pickoffs on Secret, which led to an Aegis for Arteezy and multiple objectives taken. With EG breaking into their base, Secret resolved to fight back but were routed, leaving them vulnerable for the series-ending push by the North American squad.

With their win, EG set up an Upper Bracket semifinals grudge match with a streaking OG — who defeated them in the same round on their way to lifting the Aegis of Champions last year.

Meanwhile, Secret will have to take the long way to the championship through the Lower Bracket, starting with a match against Mineski.