Mineski awaits the loser of Secret versus Evil Geniuses. 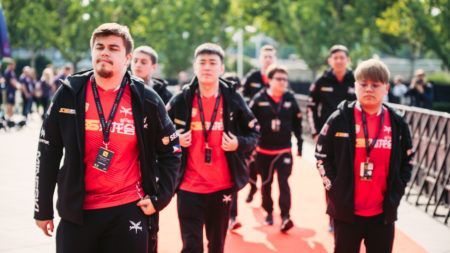 After a grueling group stage for both Mineski and Na’Vi, both teams were set for a high-pressure best-of-one elimination match in the lower bracket of TI9 against each other.

Both squads put up valiant efforts, but neither team played a perfect game. Na’Vi kept trying to take down the enemy Wraith King, but was immediately be countered by Mineski.

Meanwhile, Mineski made some questionable team rotations during the mid-game, and Na’Vi capitalized on them.

Na’Vi started to make use of Beastmaster’s Hawk ability to catch Mineski. Idan “Magical” Vardanian’s Sniper was able to dish out insane amounts of damage against Mineski’s heroes. This lead to Na’Vi taking down the bottom lane of Barracks in the Dire base.

Na’Vi almost finished the game by taking the Dire Throne down. But, Mineski’s heroes eventually respawned and punished the enemy Radiant heroes, which equalized the team’s net worth.

After Na’Vi’s monumental mistake, they tried to take another set of Barracks, but Mineski defended brilliantly and gained even more momentum.

With Na’Vi now playing hesitantly, Mineski managed to take control of the entire map and gained a massive 21,000 gold lead.

Na’Vi continued losing team fights and Mineski’s lead kept ballooning out of control. After two terrible engagements for Na’Vi at the middle lane, Mineski pushed into the Radiant base.

Ryan “Raging Potato” Qui caught out Magical’s Sniper, and Kam “Moon” Seng’s Lina was able to burst him down. Without Na’Vi’s last line of defense, the Radiant Ancient was destroyed.

Mineski will go on to face the loser of Team Secret vs Evil Geniuses in Day 2 of the Main Event.