Both teams had fun during that first game. 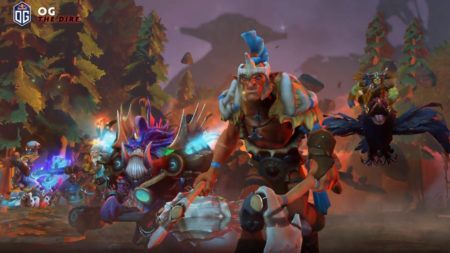 With Vici Gaming and OG taking one game each for their series, OG finished their TI9’s group stage run with the best record out of all the other teams at 14-2. Meanwhile, VG finished with an impressive 11-5 record, putting them in second place of Group B.

In the first OG decided to have a bit of fun against VG and went with a Techies pick on Jesse “Jerax” Vainikka. This unexpected strategy produced some interesting moments, such as letting OG wiping out the entire VG team, even when they were 20,000 gold behind.

During the following game, OG opted for a more traditional style of Dota 2, and as a result, the game was more of an even one with both teams winning their fair share of team fights.

OG managed to gain a slight advantage because of Topias “Topson” Taavitsainen’s heads up plays on the Invoker. Each time Zhang “” Chengjun’s Faceless Void appeared on the map, Topson threw a Tornado and EMP combo, immobilizing the VG carry.

At the 38-minute mark, VG tried to defend their last set of Barracks against OG but they didn’t have enough damage to take down any of the Radiant heroes.