NiP showed some signs of life in the second game to win convincingly against Chinese powerhouse Vici Gaming. 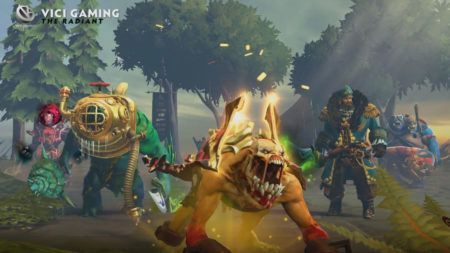 With Ninjas in Pyjamas in a death spiral and desperately needing a win, the European squad bust out the Broodmother against Vici Gaming, with mid-laner Neta “33” Shapira playing the melee hero. However, the Chinese team countered with a Kunkka, which really slowed down Black Arachnia’s farm.

Despite all that, NiP started out strong by getting pick offs on the bottom lane against Vici Gaming carry Zhang “Paparazi” Chengjun and his supports. However, with the mid-game all but lost, NiP had no answer for game one, and continued to get picked off.

Thankfully, a more conclusive fight finally took place at the 26-minute mark, with Vici Gaming able to take big kills and the lane barracks as well.

Vici Gaming ended the game shortly after, putting NiP — who are currently at the bottom of the table — very likely in the elimination zone.

The second game started out just like the first match, with both teams taking a safe approach. However, NiP suddenly found their courage and groove. Starting to take a more aggressive approach, they caught Vici Gaming by surprise.

Despite the 22,000 gold lead, NiP just couldn’t close out the game, giving Paparazi’s Morphling time to farm and hold them off the high ground. Instead, NiP kept Vici Gaming inside their base while they farmed out the map, taking a big fight to close out the game. The Europeans finally bounced back with a win thanks to NiP’s Martin “Saksa” Sazdov’s Mirana plays.