Alliance continue to impress against a lackluster Team Liquid. 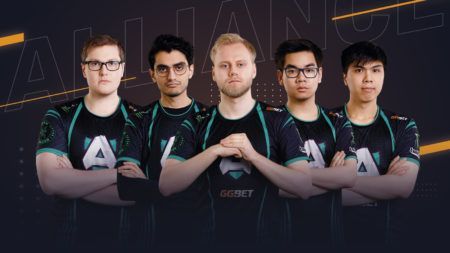 Day 3 of The International 2019 Group Stage saw Swedish squad Alliance continuing to hold on to a Top 4 spot while the TI7 champions Liquid continue to languish in the bottom of Group A.

With both of Alliance cores very weak in the early game, Liquid let Miracle- and w33 run rampant around the map and put heavy pressure on miCKe. With their Phantom Lancer yet to come online, Alliance were put on the defensive and managed to score multiple kills on Miracle- and w33 as they overextended.

That wasn’t enough to stop Liquid’s aggression however, as they continued their onslaught and were able to break into Alliance’s base after picking miCKe off right outside it. Liquid would pick off anyone brave enough to leave their base and soon after, took a much-needed and decisive win.

Alliance opted for a strong lategame composition for game two, putting qojqva on Death Prophet and miCKe on Alchemist. Liquid responded with some firepower of their own, with Miracle- on Lifestealer and w33 on Templar Assassin.

Liquid timed the power spikes of their cores with a teamwipe on Alliance in the mid-lane, opening up their opponent’s base and putting them within reach of a much-needed sweep in the series.

Alliance were able to repel Liquid’s onslaught thanks to Samuel “Boxi” Svahn’s Axe, who was key in consecutive pickoffs that gave them the advantage.

With Alliance in control, Alchemist and Death Prophet were able to snowball out of control and win the decisive teamfight to force their series with Liquid to a draw.

Alliance stay within striking distance of an Upper Bracket berth in the Main Event with a 6-6 overall record. Meanwhile, Liquid’s mixed results throughout the Group Stage with 4-8 so far mean they are either bound for the Lower Bracket in the Main Event or might even get eliminated after the Group Stage. They will have one more series against Keen Gaming later in the day to try and right the ship.