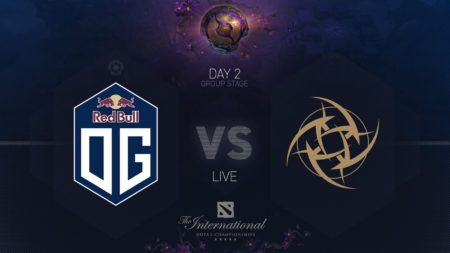 OG’s latest carry IO strat appears to have demoralized Ninjas in Pyjamas during day 2 of their group stage match. Both times, OG decided to go with a surprise safe lane Io draft for their carry player Anathan “Ana” Pham.

The first game started out rough for OG as NiP was able to dominate the net worth chart with their Slark, Mirana, and Sand King.

However, a few minutes later, game one turned into the OG show, as they completely owned NiP because of their unkillable lineup of Treant Protector, Axe, Windranger, and Ana’s fairly farmed Io.

OG ended the first game by taking down the Radiant tier four towers with backdoor protection and even fountain diving NiP.

Surprisingly, the second game turned out exactly the same. OG went with another safe lane Io draft for Ana. Then, after struggling in the early game, the reigning TI8 champions took over game two in a similar fashion.

OG disregarded backdoor protection yet again, and dove into the Radiant fountain up until NiP was forced to tap out.