Mineski’s Moon shows he is one of the best middle laners in the world. 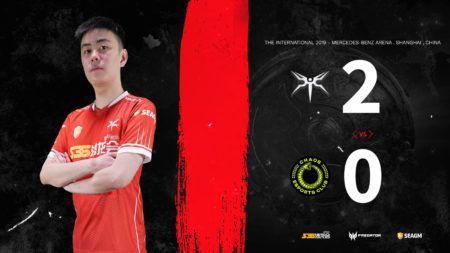 Mineski was able to go 2-0 against an underperforming Chaos squad, who continued their lackluster performance in Day 2 of TI9.

Mineski’s synergy as a team showed against Chaos. They earned an early team wipe against the struggling European squad, which was a recurring theme of the first game.

In the late game, Kam “Moon” Seng’s Lina caused havoc in the Radiant base. He shot down enemy heroes with his rapid right-click damage up until Chaos had enough and called good game.

But this wasn’t enough to give Chaos the win. Moon, together with Nikolay “Nikobaby” Nikolov’s Slark, charged into the Dire base and forced the Chaos heroes to hide inside their fountain.

Chaos had no choice but to call good game at the 47-minute mark.