When his team needed him the most, Arteezy definitely stepped up. 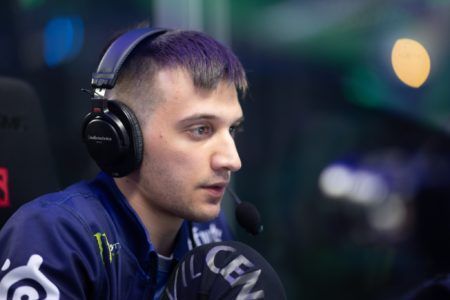 Game one saw EG go for a draft far from their normal style by copying VG’s Morphling strategy earlier today by picking it up for Arteezy to copy Andreas “Cr1t” Nielsen’s Dark Willow, with Sumail “SumaiL” Hassan on Dragon Knight backing them up.

VG countered with Troll Warlord for Zhang “Paparazi” Chengjun, buffed by an offlane Ogre Magi for Zhou “Yang” Haiyang and a support Magnus for Pan “Fade” Yi, with Zeng “Ori” Jiaoyang on Kunkka as the other core.

With both teams having cores that go online late in the game, much of the early-midgame saw sporadic skirmishes and objective defenses. Things kicked into high gear once Arteezy’s Morphling got Aghanim’s Scepter however, as it allowed him to copy Dark Willow and use Spirit Realm to deal an absurd amount of damage to give EG the lead.

Things would equalize once Paparazi’s Troll Warlord peaked, allowing VG to effectively fight back against EG.

However, the game wore on long enough for SumaiL to become a big problem for the VG as well. Both SumaiL and Arteezy proved too much for VG to take down as EG got the much-needed win against the Chinese favorites to stabilize their Group Stage campaign.

VG decided to take it late in game two, picking up a core duo of Sven for Paparazi and Medusa for Ori. EG countered with a strong midgame composition led by SumaiL on Leshrac and Arteezy on Lifestealer.

With both Medusa and Sven requiring a lot of time before they could come online, EG took full advantage of that and to accrue a considerable lead over VG.

With EG primed to assault their base, Vici Gaming took a fight just outside it and successfully repelled their opponents. It was a sign that the Chinese are still well and able to take the game late.

That lasted until a later fight where the Chinese favorites had EG on the retreat and Arteezy was left alone against the full VG lineup, but he came out with a rampage to break their backs and later secure the sweep.

With their win, EG improve to a 5-5 overall record and are poised to advance to the Upper Bracket in the Main Event even after their abysmal start to the Group Stage. Meanwhile VG have lost the air of invincibility they had after a perfect Day 1 of the Group Stage, sitting at 7-3 overall.