It was a close game between the two TI champions. 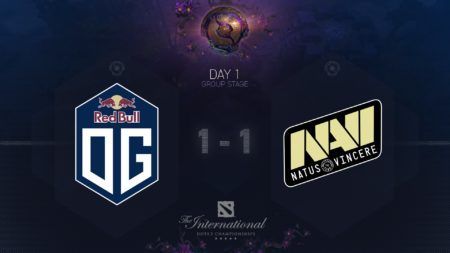 Reigning champions, OG, faced off against 2011 TI champions Natus Vincere, popularly known as Na’Vi, on the first day of the TI9, with both teams walking away with a game each.

In game one, at around the 10-minute mark, OG’s Jesse “JerAx” Vainikka’s Pangolier stunned three of Na’Vi’s team members using Rolling Thunder despite being at a disadvantage under the Radiant offlane tower.

By the 39-minute mark, OG Topias “Topson” Taavitsainen’s Arc Warden was almost indestructible, even evading the heavy damage from the Radiant fountain thanks to his Magnetic Field.

Na’Vi surrendered and accepted defeat against OG at around this time.

In game two, Na’Vi started playing more aggressively. This was evident in a three-man simultaneous kill by the team after taking down the Roshan.

OG’s JerAx’s Tiny, Anathan “ana” Pham’s Spectre, and Topson’s Zeus all went down as they were caught out too close to the Roshan pit area.

With so many mistakes committed by OG, the game easily turned in favor of Natus Vincere, who took game two to tie the series 1-1.