It was Fnatic that made EG bleed blue this time. 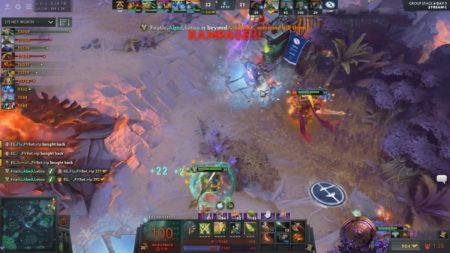 Fnatic has made their presence felt in Shanghai, defeating Evil Geniuses in a convincing manner on day one.

Fnatic dominated game one against EG.

The new Fnatic lineup had an amazing debut, led by Anucha “Jabz” Jirawong and Abed “Abed” Yusop who finished the first game with Godlike and Beyond Godlike streaks, respectively.

In game two, EG answered back and took advantage of their early team fight abilities to earn a 5,000 gold lead 17 minutes into the game.

But the new Fnatic roster remained composed during the midgame and slowly took advantage of EG’s melee heavy lineup. Fnatic eventually outlasted EG in team fights and gained the gold lead at the 24-minute mark.

With Abed’s Medusa hitting critical mass, Fnatic marched down the Dire base and demolished EG’s heroes. Abed finished the game with a demoralizing double Rampage.

Evil Geniuses will need to put more thought into their drafting phase if they want to survive the group stage.